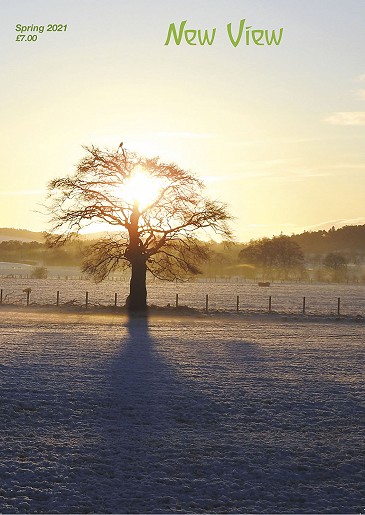 Welcome to the Easter/Spring issue of New View magazine. To begin with I can inform you that there was a truly wonderful response from readers to my appeal in the Winter issue for donations to help keep us going; it has enabled us to close the gap in our finances and make it into next year. My sincere, heartfelt, thanks to all those who donated; New View readers are a special community. As many will know, we have to fund raise year on year until subscriptions reach a new level enabling us to cover costs. Therefore, we will need to leave our ‘begging bowl’ out a little longer, but would encourage readers to please help us find new subscribers along the way as that is the long term solution for this initiative.

We felt it was also now the right time to increase the subscription rates to New View. The last price rise was in 2012 and in the intervening 9 years, printing and, in particular, mailing costs have risen enormously such that we can hardly seek further donations without addressing this. The New View cover price of £7 begins with this issue. All new price rates are on page 96.

A year ago, Easter in the UK and other parts of the world was effectively cancelled (outwardly) as measures brought by governments in the name of covid were put in place. This year feels little different and we are all clearly in a longer haul to bring about a resolving of this so called pandemic than many imagined. Yet it has also been an opportunity to take deeper counsel with ourselves, to go into the inner life and find the strength and insights to cope and, perhaps, bring a new creative approach to our lives and towards those around us.

Rudolf Steiner was quite clear in his encouragement for people to determine the truth of things for themselves, out of their own efforts, as that is the only way a person can come to firm ground. And he recognised that part of this process was to be well informed. What has become all too apparent during this crisis is the lack of properly researched information from the mainstream media. Speaking of the UK (but the gist of the following comment is clearly valid in other countries); if people here only read the national newspapers and view the BBC and ITV national television services and listen to national radio it is unlikely they will come anywhere near to being well informed, often quite the contrary. That leaves the internet which is such a difficult place to navigate for the truth. But with discrimination much can be achieved. The censorship at work in the mainstream media, including social media across the internet, ought to concern everyone. 1984 by Geroge Orwell becomes ever more manifest in real life. My challenge with New View has been to find ways to help this right informing process by raising issues and exploring them in ways not found in the mainstream and at the same time bring positive insights to help human development that anthroposophy enables. Which brings me to the vexed issue of vaccinations. This has become a huge emotional issue and clear thinking is needed to deal with that. There will be readers who receive the new experimental vaccines and those who do not. New View is carrying articles bringing information that suggests, at the very least, caution ought to be applied. If that offends readers who are vaccine compliant I hope they will step over the shadow that appears in such moments and stay part of the magazine community and be willing to continue to seek the truth of things, together. The contributions in this issue are fresh examples of what New View can bring towards the world; it brings insights that wish to engage the soul, heart and head. And truly, the quality of human thinking needs to take a step forward.

Benjamin Cherry, from Taiwan, looks at people’s ability to think in Humanity at a Threshold. Karin Jarman follows this with To Live with Fear and Not Be Afraid. Terry Boardman points to parallels between the current situation and Fascism in 21st Century Neo-Fascism: the Coming Era? Peter Taylor then writes about the need for us to break out of the conditioned thinking that we are all subject to in He Who Plays God.

Anita Charton, writing from Egypt, shares a meditation for finding our inner sun in Our ‘I’ as a Sun Being: Connecting to Ourselves as a Resource.

Harrie Salman, from The Netherlands, looks at where the impulses for the current technological advances have come from, in The Social Context of Technology: Impulses from Gondishapur verus Rudolf Steiner’s Impulse of Social Threefolding.

In Youth and Spirituality, Wolf Forsthofer, writing from Scotland, looks at the qualities of children coming to earth. Richard House then interviews an academic researcher into vaccines, Dr Mateja Černič, in Vaccination in Sociological and Paradigmatic Perspective. Jeremy Naydler then contributes a further urgent article on the unchecked proliferation of satellites in the sky in Where the Sky Turns Black: Reflections on the 5G Satellite Net Surrounding the Earth.

Writing from the USA, Jeffrey Hipolito expresses, poetically, the power behind words in Spirit in Language.

Richard House brings an extended book review as an essay on Rudolf Steiner’s Insights on Viral Illness and Epidemics in the Context of Materialistic and Spiritual Science.

My hope is that this issue may do good in the world and to you the reader, all good wishes, wherever you may be,