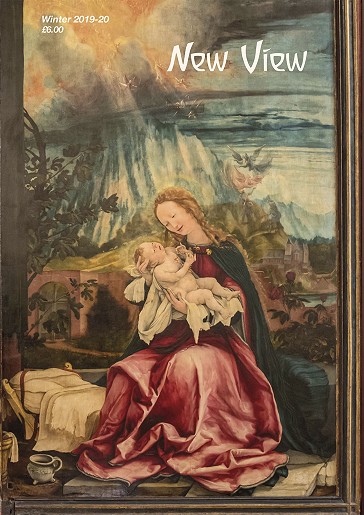 Welcome to the Holy Nights issue of New View magazine. This is the issue which enters the New Year. Although one day always follows the next, there is something about beginning a new cycle, a new phase in life, that gives pause for thought and the possibility to create new initiatives, personal and otherwise.

The people of Britain are now coming to terms with a new step, because, as I write this editorial in the early hours of Friday 13th December, the news is that, following the general election the day before, the Conservative party have a majority sufficient to take Britain out of the EU next month, in January, after three and a half years of indecision, uncertainty and no little turmoil. Whatever one’s personal view, it is surely a time for the people of these Isles to build bridges to one another. Having said that, the Scottish National Party have fared strongly in this election and will certainly call for a further referendum to seek independence. So Britain will leave the EU and Scotland may leave the UK, in time. There seems to be a significant gesture there; similar but for different reasons, of seeking more self determination. As ever, time will tell and how people respond will make the difference. And certainly it ought to be about bridges, not walls.

This Christmas I decided, in a certain sense, to offer the reader a ‘Christmas Card’. The cover of New View is like no other I ever published. On the front cover is a detail from a scene of the Nativity, by Matthias Grünewald, being part of a sequence of altar panels he painted that can be seen today at the Musée Unterlinden in Colmar, in the Alsace, France. What is different is that this front cover image extends onto the back cover of this issue, showing a whole community of spiritual beings witnessing the nativity scene. If the reader so wishes he or she can open out the magazine and see these two panels together as the artist intended. Painted in the 16th century, this art work only begins to reveal the deeper wealth of the insights and understanding available from it with the help of anthroposophy. It may not be an exaggeration to say that encompassed within it may be a doorway to the whole of Esoteric Christianity. At any rate, the cover of this issue comes to you in a contemplative mood for the Holy Nights and beyond!

And so to this New View issue entering 2020. It begins with Inner Fire by Beatrice Birch; a heartfelt and compassionate sharing of an initiative in the USA about helping people with serious soul conditions to find a way forward, free of medication.

The Biography of Holy Sophia by Harrie Salman, writing from the Netherlands, is an insightful and gently scholarly look at this spiritual being we may know more generally as Sophia and how she has ‘incarnated’ into different cultures over time. This is complemented by The Virgin of Guadalupe; Herald for a New Age, where Stephanie Georgieff, an Albanian American, briefly relates the remarkable story of the appearance of an aspect of Sophia in Mexico, South America.

We then have a reader’s letter from Thomas Meyer, who lives in Switzerland, writing to us on the subject of Otto Weininger and Norbert Glas.

The front cover theme returns with The Isenheim Altar and the Wholeness of Saint Anthony where Maarten Ekama, a Dutchman living in England, shares his insights and thoughts on the history of Grünewald’s altar paintings with particular reference to two of them depicting St Anthony.

There follows an appeal from Kenya, with Rudolf Steiner School, Mbagathi, Nairobi, Kenya: A Special Kindergarten Appeal by Judith Brown who lives and teaches at the school. Here in England we hear the story of a school community that has arisen, Phoenix-like, from the ashes of an older Steiner school initiative with New School Canterbury, Our Story by Beth Cuenco. Still on a schooling theme, we then hear from Heloise Saunders of a Steiner School pupil, aged 11, who won a national poetry competition in Arwen Kitson’s Poem for Peace. Then we publish a piece by Richard Phethean, who died in 2014, concerning one of the great issues of our present time with What is the truth about Global Warming? Although written by Richard in 2008, it is relevant to the ongoing concerns surrounding climate and points into the space where a real meeting and debate ought to be taking place, but isn’t.

It remains to be seen if the title of the next contribution can be seen to improve in time to come. Harrie Salman appears with a second piece, looking to Britain from continental Europe with There is something rotten … British politics seen from a Continental perspective.

Terry Boardman raises questions and concerns about current events with NATO’s 70th Birthday and the UN COP 25 Climate Conference in Madrid, enabling readers to think through vital issues of our time.

Finally, Trevor Dance writes a piece on the fifth centenary anniversary of a very special renaissance artist with Leonardo – Five Hundred Years On.

At the end of the year I would also like to thank all the readers who made extra financial contributions during the year, without which we would find it impossible to continue. The readership support has been a little miracle for the life of this magazine.

All good wishes to each reader, wherever you are and for whatever may come to meet you in the time ahead.