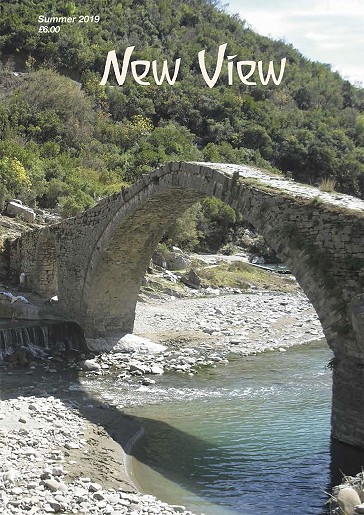 Welcome to the Summer/St. John’s Tide issue of New View. The magazine’s readership is spread around the world, albeit in modest numbers. Whilst it is based in Britain, in the northern hemisphere, as its editor I am always well aware that when it comes to each new season in the year, this changes as one moves across the world, becoming its opposite way down south. I have lived in Australia and New Zealand for some years and experienced how my innate rhythm of yearly seasonal cycles, ingrained from living much of my life in Britain, was addressed differently, inwardly, in the antipodes. I have not lived in the equatorial regions and have wondered how the course of the year is experienced there, how seasons might reveal themselves, obviously more subtly somehow. Which brings me back to John the Baptist. Here in the north there are a number of traditions celebrating midsummer, which has been given a Christian connection through identifying the life of John with this time of year. Whilst there was a specific orientation to his life, it resounded to a universal tone. His call, often characterised by the Greek word Metanoia – to change one’s ways and thinking and open to the spirit light, to Christ – is valid throughout human existence. Although it has a summer connection, in the north, in June, it has nonetheless an inward seeking orientation; to awake and open.

All the motifs of Christian festivals have this aspect of being specific to time of year and seasonally orientated and yet each can be inwardly experienced at any other time or place. A universal imagination is at work and that helps us to move our specific standpoints and orientations to experience the otherness of life. In itself this can lead to empathy and new understanding. And the world surely needs this.

With so many challenges coming towards people it is hard not to feel weighed down and there is a natural seeking for positive signs to help balance and encourage what needs to be done to change things for the better. That is where friendship and community come to the fore; to encourage and offer support on these human journeys. Rudolf Steiner warned against the danger of a descent into a “War of all against all” in the future, each person in their own self-centred standpoint; real friendship, in human community, offers a way through.

New View is a place to share what is at work in and behind events and circumstances in the world, to erect signposts pointing to what is happening in our time, ideally founded in Steiner’s anthroposophy and world view. Sometimes this does not make for easy reading. But I believe that throughout each and any issue can, with reflection and good will, be found encouragement for the times ahead and insights into the changes – Metanoia – we will help bring about and go through on our human journey.

Many people know little about the Balkans and its history that have affected so many people over time. This is gently addressed by an American, Stephanie Georgieff, who builds a bridge to connect us with that part of the world in writing about her experiences of Albania in A Glimpse at the Balkans. This in part explains the motif of her photograph that is on the front cover of this New View issue: Bridges.

Terry Boardman concludes his three part series on the EU with Brexit as a Spiritual Question Part III Conclusion: A Personal View.

Two pieces follow in defence of the Steiner/Waldorf School approach to educating children. First is The context behind An Open Letter from Educationalists to the Head of England’s Schools Inspectorate (Ofsted) by Richard House and Richard Brinton and secondly An Open Letter to Amanda Spielman (Head of Ofsted) and to Steiner Schools Recently Rated “Inadequate” by Ofsted, where the same two authors are joined by over 50 other signatories, including some 21 university professors and many professional educators as well as the former Archbishop of Canterbury, Rowan Williams.

There follows a piece written by the late Charles Kovacs: The Dragon in relation to Thinking. Whilst this was based on a talk he gave at Michaelmas in 1955 the universal aspect of it speaks to what underlies the many challenges we face today.

From the USA, Christiane Marks offers her own translation of the Austrian Robert Hamerling’s poem “Blinder Schrecken.”

Also from the USA Michael Preston looks at how we view the world around us in The Gift of Perception – Perceptual Agency and Human Experience, where the challenge of technology and the loss of physical connection is explored.

Martin Large and Richard House have formed questions in conversation with two early years education professionals in an Interview with Sebastian and Tamara Suggate, co-authors of a new book Reclaim Early Childhood, which is also reviewed in this issue.

Although geometry may be challenging for some readers, they are invited to take their time and slowly study – perhaps with some research of their own – what Philip Kilner shares in his Beauty, Truth and Lawfulness: Polyhedral Forms, Transformations and Dualities. Plutarch wrote that Plato said “God geometrises continually”. Pythagoras is also credited with having said this.

Finally, Michael Steward looks at three South American female poets who have a resonance with 1946 in Coming Back Home to Ourselves: Women Writing at a Turning Point in History.

The book reviews are often like little articles in themselves and readers are especially invited to read through them.

Wishing you, the reader, well for the time ahead, wherever you are,