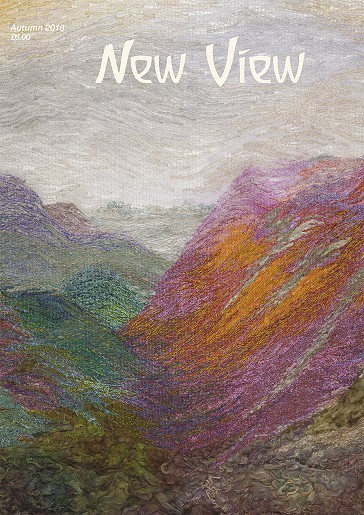 Welcome to the Michaelmas edition of New View.

As a yearly festival, Michaelmas is little known, passing by unnoticed by most people. Rudolf Steiner was at great pains to bring it alive and was unequivocal about its importance for the future. All festivals, by being recognised and celebrated each year, inscribe themselves, not only into human consciousness, but also into the ‘world-ether’ – the life body of the Earth herself. This does something not only for human development but for the spiritual and elemental forces that provide the context for material existence here on Earth.

Falling, as it does in the Northern hemisphere, during the autumn season, Michaelmas finds a natural support for its theme of overcoming hindrances and forces that would pull us down in order to bring seeds for a renewed future – as nature herself produces fruits to harvest and what is left behind falls, as leaves do, to decay and be absorbed back into the land. But that is an outward autumnal picture. A Michaelmas mood can be a conscious inner companion, wherever we live around the world, to create active deeds as seeds for a better future. An image much associated with Michaelmas is the overcoming of a dragon: this can clearly represent overcoming inner ‘dragons’ within each of us. And so we seek strength for such challenges and Michaelmas as a festival offers that encouragement.

So why celebrate any festival once a year? Perhaps because in doing so they also inscribe themselves in the passage of time, the turning of the year, and that rhythmical process supports the embodying of the essential qualities of a festival into one’s inner being; “Rhythm is Life” as Steiner once put it.

This issue of New View has grown together in a Michaelmas mood of its own; many of the articles ‘speak’ to each other with an inner thread weaving between them of the challenges we face and the encouragement to overcome them. Outwardly the words on the pages bring information and tell stories about aspects of life in the world; but they can also open up vistas and lead one to other thoughts and connections that may prove fruitful beyond the more obvious theme of any of the articles themselves. It is hoped that a good spirit may inform this issue of the magazine.

The first few articles in this issue relate to current worldwide issues. First, Harrie Salman shares his Reflections on Modern Global Migrations. Then, with questions as to the future of Europe very much with us, Charlie Lawrie looks at aspects of the historical roots of the European Union in “The Voice of Europe as a United Whole”? Terry Boardman then flags up the challenges inherent in what is presented in the mass media in The Importance of ‘Narratives’: 1914-2018 … The War on Russia, Germany and ‘Hate’

Jeremy Naydler’s The Spiritual Challenge of Artificial Intelligence is also of great relevance for today and for the future as it looks at the implications of the increasing likening of the human being to a machine.

Michael Steward then draws us far back to the source of a conversation in Meeting the Woman at the Well, about the encounter between Jesus and the Samaritan woman.

Richard Ramsbotham in Michaelmas and Easter, Autumn and Spring Poets and the Adonis Mystery uncovers depths of connection and resonance between six particular poets, and especially a little known one, Vernon Watkins, that can also illuminate one’s own life.

I had the pleasure of interviewing textile designer Eta Ingham-Lawrie at her weaving studio in Duns, Scotland and of now sharing in New View something of her life and work.

On our new Seeking Funding Notice Board the York Steiner School parent group makes an appeal for help in financing a project. Other funding initiatives are welcome to contact us in a similar vein. New View has also a social aspect to it, to help where we can.

NNA – news around the world marks its 20th year since its forming and Christian von Arnim shares something of its aims and its future.

David Newbatt brings a picture for Michaelmas and a conversation with myself concerning its inspiration.

In Searching for Atlantis – Part II, Atlantis in the Nineteenth Century, Maarten Ekama continues to explore the legend and the question of its reality.

Finally, Wolf Forsthofer compares two famous historical characters in Kafka and Napoleon and in doing so gives a deep insight into the travails and the journey of a human soul that has value beyond the personalities he speaks about.

Everything comes about through intentions that form into actions and deeds in the world. New View also comes about in this way and is only sustained at present through generous financial donations from readers who recognise its value and support its continuance. For those who have put such intentional money our way I am extremely grateful, as this is one important way that can vouchsafe New View for the times ahead. Another way is to remember us when meeting other folk and perhaps encouraging some of them to become a subscriber. That would also make a great difference to us!

In the meantime, I wish you the reader well, wherever you may be on your journey,