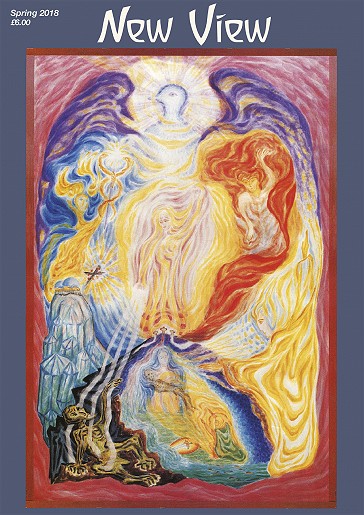 Welcome to the Spring/Easter issue of New View. Spring for the Northern Hemisphere (as folk south of the equator are approaching their Autumn) but, as I produce this issue of New View, also Easter for the whole world, whether the whole world really knows it or not. And here is the reason that gently underpins the art work on the front cover. The reality of the Resurrected Christ is a living image, a template, of potential goodness and love for every human being, for the whole world; New View wishes to stand for and with that.

Rudolf Steiner was very clear about the importance of festivals marking the passage of the year and laid great weight on the value of participating in the yearly Christian festival observances. Not from any formal religious perspective as such, for he tried to bring the essence of the passage of the year, through the changing seasons, alive for people so that they could make an independent relationship to the living quality of nature and the cycle of the year within their own soul life. The inner, the outer, making a bridge of understanding and discovering meaning. This is a task for each human being; to evolve and develop, to really come to know oneself, one’s origins and connection to things. Quite a challenge, of course.

Those who have met Steiner’s work and penetrated to some extent his world view – and made of it something authentic and personal – become only too keenly aware that in the world as a whole this task of self-knowledge and connection is not easily shared by others and much of what transpires through human activity can be painful. But there is also much good in the world. As an arena for self-development – a stage for our dramas as William Shakespeare might have it – the world offers time and space for all the challenges one could imagine and also all the possibilities. Me, the world and my inner life. So what to make of it all? As Tom, who happens to also be putting a magazine into the world, I often take time to consider what it is I think I am doing, achieving, through this particular task with New View. Ultimately I do this because, in a small way, I wish to help people, by bringing towards them, as best I am able, ideas, stories, experiences, concepts and insights that may prove of value in some manner to their lives. If everyone on the planet knew of the work, and depth, of Steiner, then New View would not be necessary. But as long as people wish to subscribe to New View, then I keep going. I am rather like a midwife for the inspirations and impulses that Steiner has brought alive in people who, consequently, wish to share and bring to birth their thoughts through the pages of New View into the wider world.

And so to Atlantis, or at least a beginning in the company of Maarten Ekama in Searching for Atlantis – Part I: Plato’s Atlantis. Part II comes in the Summer!

Gabriel Kaye then writes of the urgent need to change the way we farm in Land for Life: securing life-giving biodynamic farmland for generations to come.

Paul King offers some explanatory notes in A General Introduction to Anthroposophical Concepts – which may be of value to many people – as a prelude to his translated article of Dr Ernst Marti’s Ethers and Etheric Formative Forces – the Importance of Making a Distinction.

We can then ponder, if we will, for a moment with David Donaldson and two poems from his new book A Treasury of Trees.

Paul Carline takes time to share the dangers to human evolution when concepts are not really thought through before being applied as ‘truths’ in Evolution and the problem with Darwin.

NNA News around the world compiled by Christian von Arnim pays tribute to a pioneer of the Sekem community in Egypt, Ibrahim Abouleish, who crossed the threshold last year. A remarkable man who really worked with nature and the inner life, building bridges.

Freya van Midden-Ziegler, the daughter of the artist behind the cover picture, shares a biography of her father in Manfred Ziegler – Artist, Researcher and Teacher and we feature some of his art in New View.

Maria Lyons shares the fruits of her work on a PhD with Education, freedom and personal responsibility: Reflections on a doctoral thesis.

J. W. von Goethe is then featured in a number of pieces concerning the environment, animals and colour made possible through the translations of Charles Lawrie; namely poems (Rainbow; Rain and Rainbow), a translation from an unpublished manuscript of Rudolf Steiner’s concerning Goethe’s relation to Natural Science 1895 and a poetic work The Metamorphosis of Animals, 1806.

Finally Wolf Forsthofer gives a biographical picture of Rosa Mayreder, a person who was much respected by her contemporary, Rudolf Steiner.

I have a wish/hope that it might somehow come about that each subscriber to the magazine could find maybe just one other person to become a subscriber to New View; then I really could cease fundraising!

In the meantime, I wish you the reader well, wherever you may be,
Tom Raines – Editor.