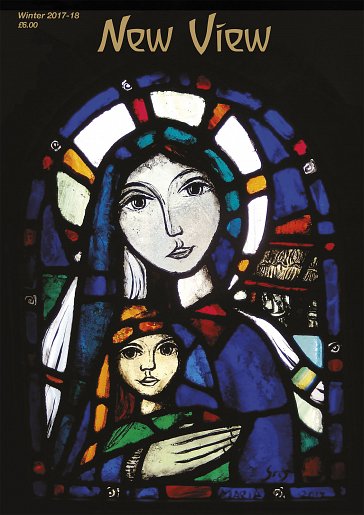 Welcome to the Holy Nights issue of New View.

It has always been difficult to theme any issue of New View, to get a number of authors together to write for a particular issue, from different perspectives, to build up and deepen a picture about a common theme. In fact the only one I really succeeded in doing sufficiently well to say it was a themed issue was back during the war in Kosovo when I first began working as New View editor. So it came as a gentle surprise to see how many contributions for this issue were looking at Goethe, in different ways and for different purposes. Encouraged, I went and searched the archive material of the late Charles Kovacs and brought forward two interesting articles based on talks he gave in Edinburgh, Scotland (for he was a teacher at the Steiner school there for many years) about this remarkable man. They are published in this issue to complement this sense of a gradual awakening to a whole way of seeing into the world and oneself that Goethe practised. Rudolf Steiner recognised that which Goethe embodied as vital for our human future; as Kovacs intimates in one of his articles, in looking at Goethe, Steiner was also looking at the future.

The process of this three monthly journal is such that whatever is quickening in people tends to draw the material together. I endeavour to be awake enough to listen and take the pulse of life around me and try and sense what is important to bring forward for the readers as I cycle through the festival points of Easter, Christmas, Midsummer and Michaelmas. I serve three communities in doing so: the community of authors, the community of readers and the community of the real editors in the spiritual world, whoever they may be! So New View has its own three-fold life.

Goethe and Rudolf Steiner, with Charles Kovacs, therefore seemed a good place to begin in this issue, coming as it does at Christmastime, through the Holy Nights (a good time to take time and ponder things) and looking into the New Year ahead, a turning point once again in the cycle of years. Picking up a theme that has especially resonated in 2017, 100 years on from Steiner’s first attempt to encourage a threefolding approach to society, Michael Burton, writing from New Zealand, gives the background behind how he came to write a play – This War is Not Inevitable – based on Steiner’s attempts to introduce a Threefold Social Organism in Germany. The play will be performed on tour in North America in the New Year.

Terry Boardman looks at two different times that bear similarities, spanning three different centuries, in 1849 and 2017: Thoughts on ‘Globalisation’. More than any other issue in the year, I always feel that this one at the end of one year and the beginning of the next might be given more time by its readers, especially over the Christmas period. So I am supportive of articles that can be a little longer and deeper, even in these ‘fast’ times. A slow read has much to offer.

Finally a reader has stepped forward to open up a look at the English folk soul. Stephen Douglas, writing from the Czech Republic, having moved there from England, explores imperial attitudes and where we are with all that today through a classic of English literature in The Dilemmas of Lord Jim: Reflections on the English Folk Soul. Other writers on this theme, also for other countries, would be warmly welcomed and encouraged. The Folk Souls and Spirits need our engagement.

An appeal for help from a Kenyan Steiner school forms the contribution from Christian von Arnim with NNA – News around the World.

Reaching the centre of the magazine, the Holy Fool is glimpsed in The Art of Greg Tricker with a number of reproductions of his recent painterly work in the centre pages.

Richard Ramsbotham has compiled a collection of seven tributes to the Goethean scientist Margaret Colquhoun, who died earlier this year, in The Marriage of Art and Science and The New Hibernian Way.

Maarten Ekama then takes us on a journey with Plutonists and Neptunists: Goethe between Fire and Flood ending up in the final scenes of Faust. He also thinks he might invite us on a journey to Atlantis in the Spring issue, so to speak!

Charles Kovacs then reappears with a second article on Goethe: The Challenge of Goethe’s Way of Thinking which touches on aspects surrounding his scientific work and particularly the reactions to his Theory of Colour that is also looked at in a deeply researched book review by Malin Starrett, from Northern Ireland, in the book review section. A mention should also be made of Charlie Lawrie, from Scotland, who offers readers his new translation of Goethe’s Metamorphosis of Plants. Goethe has surely made his mark in this issue, which contains much food for thought, so please take your time – undigested thoughts can play havoc!

As 2017 draws to a close I would like to recognise all those kindly souls who have shown good will towards this initiative, in so many different ways over the last year; some of that good will has shown itself in ‘life-saving’ support in terms of financial donations and so, together with Rosemary Usselman who is the other part of the New View team, a deep, sincere and heartfelt thank you to all the good willing folk who have thought about what we do with this magazine and taken some measure of action in support: You keep us going.

Finally, to the one who is now reading these words, I wish you all that is well for the time to come, wherever you are.