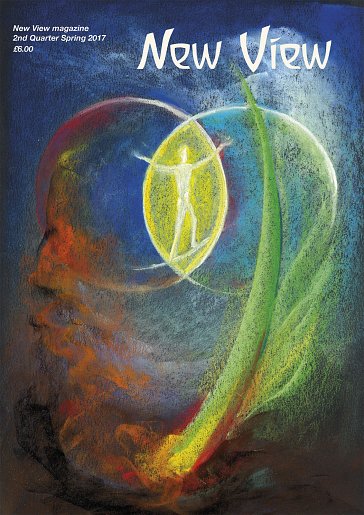 Welcome to the Spring/Easter issue of New View. With world events swirling around us, I have been made aware of the call, from a number of people all over the world, to take the opportunity, now, to work together to bring about an awareness of Rudolf Steiner’s Threefold picture of Society.

It was one hundred years ago, in 1917, during the First World War, that Steiner first made public his ideas concerning these three spheres of Rights (political), Culture (spiritual, education, the arts etc.) and Economics. Whilst having a relationship to the threefold cry coming from the time of the French Revolution of Freedom, Equality and Fraternity – which also formed, at that time, an underpinning of the Founding Fathers’ deliberations for a new constitution in America following their separation from the British – Steiner’s picture was based on the reality, for him, of the threefold nature of the human being – the thinking, feeling, willing basis that he found fully established in the physiology of the human being: The head/nervous system; the heart/lung rhythmic system and the limb/metabolic system. Many years ago, Owen Barfield, a deep student of Steiner’s world view, said that the threefold society ideas will not be grasped by anyone properly – and therefore cannot become a reality in the world – unless these ideas enter a person who has already a profound, living, grasp of their own threefold nature. And that may well be the problem that is encountered when bringing these ideas into public today.

The ‘soil’ of the soul of a person has to be prepared by awakening them to their own threefold nature; then the ‘seed’ of the Threefold picture of Society can be received and ‘root’ and grow ‘legs’ and begin to stand on the Earth. There really is no other way.

Whitsun Meetings, across the world, for the Threefold concept becoming a reality?

In Steiner’s time his threefold ideas fell on stony ground; and so he abandoned them to the future. That future is surely upon us now. The key is to work together. Many people connected with Steiner’s work could decide to meet, at this Whitsun time, and find amongst themselves ways forward with this very needed healing concept for Society. Why Whitsun? Because it has a spiritual reality that can support such an endeavour. Its rhythm as a celebrated festival has been systematically undermined by secular society for many years – it used to be a holiday for school children across the land – and it has all but disappeared from public view. If this idea for meetings across the Earth was taken up, I would be interested to hear from any participating readers and perhaps we can share something that might help in coming issues of New View; Threefolding is a theme that will remain alive in its pages from now on to support it becoming a common reality.

And so to the contents of this issue of the magazine. In the light of some comments I received from readers concerning Terry Boardman’s article in the last issue of New View, I made an interview with him to give him an opportunity to clarify some of the things he said in his article. Harrie Salman then reports from Holland on tentative steps being carried out in Europe to introduce a Basic Income in Experiments with a Basic Income.

Judyth Sassoon appeals for a different way of doing science in Goethe’s Scientific Method: Its relevance in a post-mechanistic future. This is complemented by Wendy Cook, who writes a brief biographical piece on a doctor whose artistic approach has brought insights to understanding the human heart in Profile of Dr Philip Kilner: A Goethean Approach to Teaching.

A contribution from Ed Berger, Matthew Hayes and Mandy Nelson tells of a project to grow food on the rooftop of a college in Birmingham in Biodynamic Urban Farming: The Case for City Centre Rooftop Gardens

NNA News around the World brings us a report on a ‘sensory’ event in China – with a nod to Goethe!

Maarten Ekama then looks at the history of the efforts made by many scientists and geologists to try and date The Age of the Earth.

We then publish posthumously a short lecture given 50 years ago by Charles Kovacs, Whitsun – also to support the New View Editor’s question about meeting together at Whitsun.

Professor Heinz Buddemeier continues to look at what has happened to music with Part II of Music in the Grip of Technology: The Destiny and Mission of Music in our Time.

Jonathan Stedall shares some of his poetic thoughts on the spirit, loss and connection in No Shore Too Far.

We then warmly congratulate Vibhusha Delamore, from New Zealand, on winning our Short Story Competition and feature her winning composition – The Fallen Cone.

In Creation and Evolution in The Tempest: How Shakespeare Concealed and Revealed the Truth, John Marking explores the underlying and hidden mystery knowledge that Shakespeare wove into this play.

Finally, with From Head to Heart – from Theory to Practice Colin Andrew Brown shares some personal insights on an approach to practising ‘heart-thinking’.

On page three you will see some information on how to obtain digital or paper copies of New View. It is also a plea to spread the word, as more people buying the magazine would help us enormously as we walk a financial tightrope.

For Easter, Whitsun and whatever lies ahead, I wish you, the reader, well, wherever you may be.