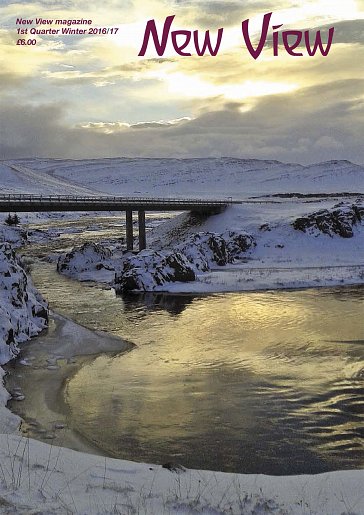 Welcome to the Holy Nights, Winter issue of New View. I recently had cause to think again about what it means to live in different parts of the world whilst joining in a common celebration; one that has a spiritual content to draw people closer and humanity further along a good path. The Holy Nights stand before me and I realise that they have been consciously worked with for hundreds of years. All that good will over time from human beings turning their thoughts to the spirit has clearly enscribed an opening that the spiritual world has helped to build; a real bridge between us, incarnate humanity, and those who are present in our true spiritual home. But what if humanity as a whole stops thinking, feeling and practising a gentle reverence and reflection during the Holy Nights? Would the portal close, the bridge fall away from disuse?

Beings that have gained the appellation of ‘archangel’, those spirit presences to whom Rudolf Steiner pointed when referring to the cycle of the year through the temporal seasons are, it seems, active in different ways in different parts of the Earthly planet we live on, connected to the seasons (which are an outward expression of spiritual events in the cycles of time). And so one perception suggests that to be the other side of the world, with a different archangel might mean that a festival in one hemisphere is not wholly, or even rightly relevant in another. A moot point. But consider the Holy Nights. Are they only for a part of the Earthly world? If I travel, as a modern person can, on a plane to the other side of the world during the Holy Nights, from North to South, do I lose the portal, the bridge, the connection at that time? And if I am living in the tropics, even on the equator, am I in a spiritual ‘no man’s’ land; or serving two archangelic impulses at the same time… and, if so, how? Through our repeated deeds, humanity builds connection. Is it only true for a certain place and time? Or is there also a universal aspect to it, making a connection possible for all if at least one, or some, have opened it? So might the Holy Nights be available to all around the Earth, for example, even if our environment is very different, depending where we are placed on the Earth? Is something of the universal spirit of the human being available and present even whilst the local, particular, needs also to be met? Not either or, then, but both?

This is a concern for true connection whilst living in a world that has strong impulses for division and alienation. In the end, it is surely friendship that will make the difference. What does the starry world know of that? Is friendship a truly human quality?

Terry Boardman opens this issue with a look back, and an eye for the future, at major events in the world and shows how astrological cycles carry impulses into world historical epochs in The Year of the Black Swan – Brexit and Trump.

Laurence Cox then brings us to Earth with Humans in the Natural World: The Ecological Vision of the Field Centre, telling us how practical skills can be especially used in therapeutic education.

Music in the Grip of Technology: The Destiny and Mission of Music in our Time by Prof. Heinz Buddemeier is a new English translation of this work looking at how entertainment has become an industry. This is the first part of a small series of articles.

New Fruits from Eurythmy by Bernard Jarman reports on new experimental biodynamic research concerning the growing of fruit trees in Switzerland and the effects of Eurythmy on them.

Maarten Ekama continues to explore radioactivity in Manifestations of Natural Radioactivity, withthe third instalment in his series of four.

NNA Editor Christian von Arnim, writes with clear concern about the political mood in Europe and its inherent danger to the healthy social fabric.

We are then invited to glimpse a very unusual book project that artist Greg Tricker has recently been working on, relating to St. Bride.

We are always pleased to be able to offer examples of original research and this is what Malin Starrett from Ireland gives us in Coloured Shadows Interacting. It requires patient study, but if the reader gives it time the rewards are there. And here, as Editor, I should say that there are some long articles in this issue; readers are encouraged to take their time. New View comes out only every three months. It is a slower read and a deeper one than many publications, because that is sometimes the way to build more substantial understanding about ourselves and the world we live in.

With Shakespeare’s 400th anniversary year drawing to a close, we feature an essay from a book written by Willem Veltman giving insights into the Bard’s last finished work in The Tempest – Justice and Love. The final part of which shows very clearly that the deeper intentions and artistry of Shakespeare can gradually reveal themselves when approached with the help of concepts that anthroposophy brings alive when in connection, in relationship, to the world and the ‘other’.

It is my hope that this issue of New View provides real substance during the Holy Nights and beyond.

As I contemplate the way ahead, I know New View needs more consistent financial help to create a better basis for continuing what the magazine fosters in the world; if that is wanted then I trust help will come.

Finally a special thanks, once more, to all the help David Newbatt has given me and the magazine over the year – particularly helping me at the last minute with an image of ‘Green Shoots’ which I ‘commissioned’ to encourage us all.

On the threshold of a New Year may I wish you, the reader, well, wherever you may be, for whatever you meet.