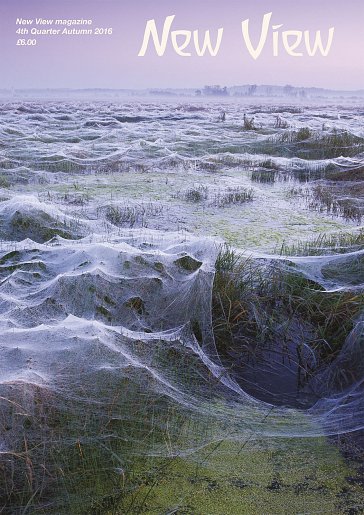 Welcome to the Michaelmas issue of New View. In 1963, the folk musician Bob Dylan wrote the lyrics to his song ‘The Times They Are a-Changin’. A deliberate attempt to write an anthem of change for the time he was living in, its background was the struggle of the Civil Rights movement in the USA. Dylan later said “this was definitely a song with a purpose. It was influenced of course by the Irish and Scottish ballads…’Come All Ye Bold Highway Men’, ‘Come All Ye Tender Hearted Maidens’… The civil rights movement and the folk music movement were pretty close for a while and allied together at that time”.

Over fifty years since it was penned the five verses of the lyrics are just as appropriate in our world today: its final verse, echoing lines from the Book of Ecclesiastes:

We live in a rapidly changing world; the great issue is how each one of us can understand, live and work through the sheer pace of events unfolding. Of course we humans are the agents of this change. By the side of Dylan’s call of ‘Times a-changin’ can be added the words in Goethe’s Fairy Tale, uttered by the old Man with the lamp, “The Time is at Hand”. Particularly for those of us living in Europe and Britain the time is surely now at hand for a new view and a new actuality of social, political and economic life. This is why New View is now committed to supporting the Threefolding impulse of Rudolf Steiner in each issue of the magazine.

Owen Barfield (1898-1997) was a great exponent of Steiner’s work and I had the pleasure of spending an afternoon with him, not long before he died and shortly before I became the editor of New View. At a certain moment he said to me that he had been to many lectures and meetings over the years where Steiner’s threefold ideas were spoken of and discussed, but he had come to realise that no proper understanding of these ideas would ever happen within a person unless they first had a grasp of the meaning of their own threefold nature – that of body, soul and spirit; with capacities of thinking, feeling and willing. Without this, the very concepts of threefolding would never take root.

So we commence this Michaelmas issue with three articles on the theme of social threefolding, dealing with different aspects of it. Rudolf Steiner’s Vision for our Social Future: Openings for Social Threefolding by Martin Large, Steiner and Threefolding by Maria Lyons and Education, Business, the State and the Threefold Social Order by Edward Udell. Terry Boardman then looks back at the events of the past and shows their reflections in our present time in Echoes of the 9th Century in Our Time.

Richard House looks at issues still affecting children in ‘Toxic Childhood’ Ten Years On – and what we can do about It. School teacher Krzysztof Zajaczkowski writes on the subject of Digital Technology and its Challenges.

Matthew Barton then gives his impressions of the newly confirmed Labour Party leader Jeremy Corbyn in Listening Beyond the Walls.

The Art of Spiders features the full photograph by László Novák, a detail of which features on the cover of this issue of New View and is accompanied by a short piece by the Editor.

NNA News Around the World compiled by Christian von Arnim contains reports on an initiative in Palestine, the fight against trade deals and dealing with radicalisation.

In Living Thinking: Entering The World-Mind Ian Trousdell gives a contemplative approach to the world and ourselves. Bernard Jarman then writes about the special relationship between human beings and the earth in Re-wilding and Thoughtful Interventions..

The Kangaroo’s Revenge provides a touch of humour with a short antipodean story related by the Editor, before Maarten Ekama expands on the theme of looking into matter (begun in the Summer issue) in The Disintegrating Atom (no small matter!). Finally, Lynne Wycherley gives a short review of a film and some thoughts that highlight the effects of electromagnetic sensitivity in Desperately Seeking White Zone.

ANNOUNCEMENT: Website re-launch with a downloadable version of New View magazine.
At last, after many trials and tribulations, we have re-launched our website (the old one was nearly 18 years old). It is still very much a work in progress but you can now purchase and download an electronic version (as a PDF) of each issue of the magazine. Whilst many readers prefer a paper version it does now allow an option, particularly for those living overseas from the UK, also saving money on the proportion of mailing costs included in a subscription to the paper New View. We are also in need of funding support, some of which would help us to initiate and complete the work of putting an archive of all New View’s articles online. Please bear us in mind.

Wishing you, the reader, well, wherever you may be.