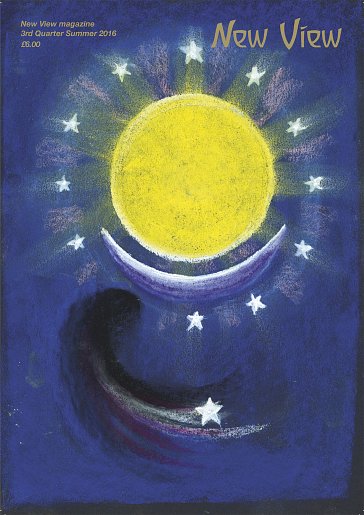 Welcome to the Summer (in the Northern hemisphere) issue of New View. This issue of New View was held back for a few days from going to press in order to wait and see the result of the British referendum on the European Union on 23rd June. As the world now knows, the British people voted by a small majority to leave the EU. Something like 52% votes were to leave and 48% to remain. Over 33 million people voted and the leave majority was by just over a million votes. What to make of this? What influences played into people’s voting decisions? How well informed were we all about the real impulses alive in the forms and processes of the EU? Clearly Britain as a whole is divided. There will be many consequences following this decision but it is too simplistic to quickly label it good or bad.

In the wake of the result I feel quiet, sombre, a sense of responsibility for what we must all carry now as to what happens next. If you step away from a situation, a relationship, you do indeed leave a space ‘out there’ – but, somewhat paradoxically, you also confront this space within yourself too. What then fills these spaces is the open question.

I do not see that we are ‘Little Britain’ and isolated (although some poor souls may prefer that). I personally have friends dotted across Europe (and the world, come to that) and this does not change the heart of any of those relationships on a personal level.

There are many perspectives to be found in trying to comprehend how this decision has come about. From one view I am minded of the process of alchemy, where a substance is separated, withdrawn, into its individual elements, each of which then undergoes a transformation, before all can then recombine in a higher synthesis. Perhaps, on a wider social scale, this referendum decision may prove a catalyst for the political/social change, both in Europe and in Britain, that is needed for us all to find the right forms to better associate and work together; there is always Hope. But it is important for people to wake up, to stay awake and play their part.

Rudolf Steiner gave a deep insight into the Hundred Years War between the English and the French which straddled the 14th and 15th centuries. It was the time of Joan of Arc and the eventual expelling of the English influence in Europe. It left the English feeling isolated as an island. From a spiritual perspective Steiner maintained that this was important at that time for Europe to develop its individual cultures free from the influence of the English. Now, the British (but strongly the English element – however one might understand that ‘Englishness’) has taken itself out of a political relationship with Europe through its own act of will. Nearly a100 years ago, as the First World War drew to a close, Steiner presented a threefold picture of society that he felt would have brought about a healthy relationship between all peoples and nations. It was not taken up. But he said that in a hundred years’ time conditions could be ripe for another serious attempt to be made. That time is at hand.

And so Terry Boardman begins our journey through this issue of New View, looking at Aspects of the British Referendum on the EU – the One and the Many. Over in America they also have choices to make as Donald Trump attempts to stand for President. Do Not Be Taken In by Charlie Lawrie offers insights in to who this man is. Then Harrie Salman, writing from the Netherlands raises awareness, appositely, for The Intelligence of the Heart. This is followed by The Small Matter of the ‘Atom’ by Maarten Ekama that looks at the fundamental understanding of the basis of our material world. Theresa Roach Melia, writing from California, USA, offers a thoughtful complement to this with A Meditation on Radiant Matter.

NNA News around the world contains reports compiled by Christian von Arnim; including a change of name and an insight into extreme right wing movements.

The danger of commercial profit-motive inspired control of education is highlighted in The Academisation of England’s Schools – Progressive or Reactionary? by Richard House.

Shindig Rhymer then makes a reappearance, voicing concerns, in his inimitable, timely fashion, that resonate with the generally experienced undermining of the social ethos in care communities, in The Dead End of an Era.

Trevor Dance then makes the case for Rudolf Steiner – Art Historian? in writing about a new publication based on lectures given, with slide shows, by Steiner in 1917.

Finally, Rudolf Steiner on the World Stage: Social Threefolding During and After World War I finds Edward Udell, writing from the USA, bringing the historical background to those attempts of Steiner to introduce his ideas on threefolding. I am hoping this will set the scene for further contributions in New View (readers are warmly invited to contribute!) that may help us all find the new forms necessary for living together harmoniously.

After quite a struggle, for various reasons, New View is now on the cusp of being able to launch an online version of the magazine, requiring a complete overhaul of the website. ‘Watch this space’. Pro tem, I can make some downloads available by email if people contact me.

Also, my thanks and heartfelt appreciation for the donations we have received, and continue to need, to help us keep New View alive.

Wishing you, the reader, well, wherever you may be.