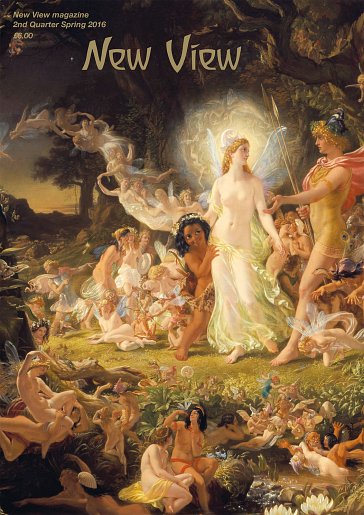 Welcome to the Easter/Spring (in the Northern hemisphere) issue of New View. This issue was completed in time to mail-out during Easter Week. Somehow I imagine the world and each of us living beween the events of Good Friday and Easter Sunday. That the events of these two days are like portals through which we all pass, in time; the coming to terms with death in all its forms and the finding of the light in the resurrection. These are fully universal themes in all human life.

I have an apology to make. In the Summer 2015 editorial I spoke of the Celtic peoples and of Esoteric Christianity. I wrote the following:

“Steiner also mentions, in his lectures published as The Mission of the Folk Souls, that the Archangel known as Michael (named from the known Christian tradition, but other cultures might know the work of such a spiritual being by other names) was once the angelic guide of the Celtic people. This being, Steiner asserts, was then given the task of being the guardian of Esoteric Christianity.”

This was an error on my part and I am indebted to reader Charlie Lawrie from Duns in Scotland for contacting me to question what I had written and am grateful that he did so. Steiner never made this assertion and identification with Michael in this regard. I have lived with this question of the Celts and estoteric christianity for a long time and whilst it is clear that Michael can clearly be seen as having intimate co-operation in these matters, I had also never come to the conclusion that I wrote about in the editorial. I have always thought one should be very careful in naming and identifying the actions of people and spiritual beings, unless you are absolutely sure. I therefore wish to set the record straight and wonder what was at work when I wrote the editorial. So please accept my apologies, it was not my intention to mislead you, the reader. Seeking the truth is no easy matter.

This year commemorates 400 years since the death of William Shakespeare on 23rd April, 1616. And so New View honours this with a number of contributions. In Celebrating Shakespeare ‘ s Work, Josie Alwyn looks at the lasting appeal of Shakepeare’s works. This is complemented by a piece in an appropriate imaginal poetic way by Charlie Lawrie with the Swan of Avon. Tragedy by Trevor Dance then examines that genre with particular reference to the Greeks and the Bard.

In The Threefold Social Order and a New Mystery Drama, Michael Burton (from Australia) tells us of a ‘fifth mystery drama’ that has been written, following on from the Four Mystery Dramas written by Rudolf Steiner. It is hoped to bring about the performing of this new work.

We then enter the world of music with Tone, Sound, Noise and the Future of Music by Michael Jones, particularly referencing the work and music of Ferruccio Busoni.

Rosemary Usselman reports on an address given by Prince Charles by video link to a recent biodynamic convention in Italy in HRH Prince Charles, Rudolf Steiner and Agriculture where the Prince speaks appreciatively of the work and insights of Steiner with regard to agriculture and the land.

In June this year, the people of Britain will vote in a referendum on whether to stay in, or leave, the European Union.In 2016 – Britain’s Year of Decision, Terry Boardman gives an indepth, historically informed, context for this.

_ Don’t Google it… Goethe it!_by Margaret Colquhoun encourages us to ‘behold nature’. This finds a complement in Drawing Closer to the Earth by Jackie Queally, looking at listening to the Earth and finding the spirit in it.

Martin Baker of Bothmer Movement International then gives us An Introduction to Spatial Education.

Another contributor from the USA, Tiffany Baer MD, reports on a disturbing infringement of parents’ right to choose what is best for their children in Mandatory Vaccines in California. This is an issue that will come towards many other countries in the future.

Christopher Cooper then explores some questions concerning controversy surrounding manipulation of our weather in Climate Change and Geoengineering – Where Lies The Truth?

Former Waldorf teacher Richard Brinton looks at the importance of teaching of foreign languages in What is the Value of Learning Languages? And, finally, Christopher Houghton Budd offers an insight into Steiner’s view of economics prompted by a recent hollywood film on the subject of the sub-prime mortgage crash impacting on financial institutions in 2008 with The Small Long – a review of the film ‘The Big Short’

The future of New View? We constantly cut costs, seek donations and fund raise to keep going. I have a dream; that the present readership might each find one other person who would become a new subscriber. That would make all the difference.

In the meantime, we go forward and I sincerely wish you well, wherever you may be.