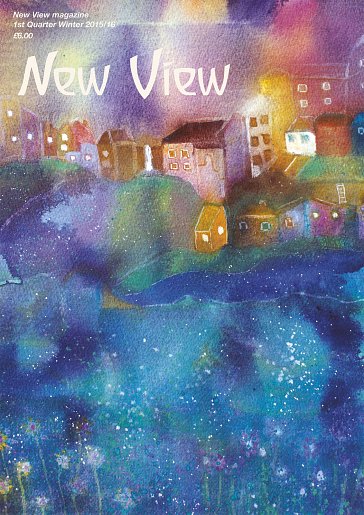 Welcome to the Winter issue (Summertime for readers in the Southern hemisphere) of New View, which accompanies the turning of the year that occurs during the Holy Nights. It may be interesting to ponder why we do not usually speak about the ‘Holy Days’ at this time of year. What is it about the Night?
The German poet Novalis, who lived and died at the beginning of what became known as the Romantic Period (both in Britain and Germany) – flowering from the late 18th century to around the middle of the 19th –, wrote deeply spiritual, philosophical insightful poems, essays and stories. He sought a new understanding of Christ, of faith, of God. In his professional life, having studied mineralogy, he worked as a supervisor in salt mines in Saxony and saw the manifest world as infused with spirit. He was greatly influenced by, amongst others, Goethe, a contemporary who himself influenced many others, including George MacDonald, whose work had a measure of influence on C.S. Lewis and the ‘Inklings’ who included Tolkien and Owen Barfield.
Well, influences travel, like ripples across the water. I am making a roundabout way to the moment when Novalis completed a set of six prose and verse lyrics, completed at the very end of his short life (he died in his 29th year). This work entitled Hymnen an die Nacht (Hymns to the Night) was first published, shortly after Novalis died, in 1800 in a German literary magazine, Athenaeum. It is a work in which Novalis celebrates the Night as an entry into a higher life, anticipating a mystical and loving union with Sophie (a young woman he loved who had tragically died young aged 15) and with the universe as a whole after his own death. Novalis sees in the Night the potential and reality of all things.

With its poetic construction, Hymns to the Night presents a challenge for translators. Having said that, there is one verse that particularly stands out for me; taking the George MacDonald translation:

One day the stars, down dripping,
Shall flow in golden wine:
We, of that nectar sipping,
As living stars will shine.

There are many levels of understanding when approaching poetic works, but I have always found a deep resonance with this verse and what I can understand as Good Will. This is a substance that makes all right and good relationships flourish. In our world, between one another, without good will we have nothing life enhancing. And how hard it is to find such good will at times. The Grail Cup that many speak of is surely a vessel for this heavenly substance. How flows this substance for humanity today?

This seems a relevant introduction to The Paris Attacks of 13th November 2015 and the Refugee Crisis by Terry Boardman, which explores the deeper historical background to the conflict behind such appalling events.

Matthew Barton then comments on a related political oratory in The Speech by Hilary Benn. David Donaldson offers a perspective on the profound impulse of Steiner inspired education as a slow but sure way forward in Radicalisation. Michael Frensch from Germany then shares A Feminine Inspiration, alsobrought about considering the events in Paris, looking back to the French Revolution and forward to the human future.

Musings at the Turn of the Year by Paul Carline offers perceptions on the light and dark aspects of human conduct.And so to Asia, where a number of people from the west with backgrounds in working practically out of anthroposophy have spent time giving courses to local people in the east. Personal Reflections on Waldorf Education and Anthroposophy in Asia is Jill Taplin’s experience as an educator, complemented by After Images of a Journey to the Far East by Karin Jarman, an art therapist.

Introduction to Problems of Society by Matthew Barton offers a prescient comment on society and Steve Briault follows this with Camphill Communities: Living, Learning and Working in Partnership with the ‘Disabled’ and looks at the trials and tribulations besetting the Camphill movement in the UK.

The Shepherds by Charles Kovacs (a posthumous publishing) brings an insight for Christmas and A Letter from my Heart by Michael Burton from Australia, is a plea that we may not shy away from looking deeply at the difficult background driving world events.

NNA News around the world, compiled by Christian von Arnim, offers insights into work with emergency education for children (refugees, etc.) and aspects of conflict resolution in the world.

Bringing Myrrh to Myrrh Part III: H.D. and the Gleaming Magdalene completesMichael Steward’s trilogy on the modernist poet Hilda Doolittle. Then an oasis of art and humour appears in Dry Point Etching by Rachel Everitt; a moment to appreciate how artistic creativity can refresh the spirits!

New View in my Life by Anastasia Palmer is a thoughful insight into what this magazine can mean and do in the world. Paul Carline then tells us about The Present Age journal from the 1930s.

In the New Year, I hope to launch (finances permitting) a new and better website offering an online version of New View that may be a helpful option, especially for overseas readers, to complement the existing paper one.

At the end of 2015, my grateful thanks go to the authors, poets, artists, readers and donators. Without all of you we, quite simply, would have had to cease to exist.

Wishing you, the reader, well for the New Year ahead, and beyond, wherever you may be,