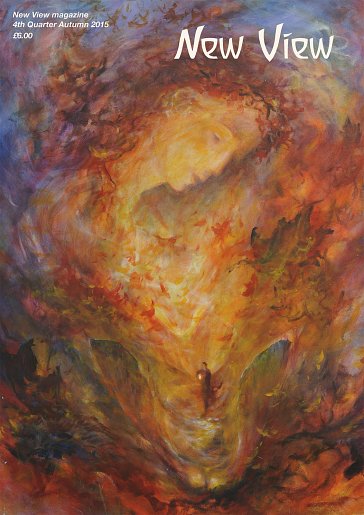 Welcome to the Autumn issue of New View magazine (the Spring season in the Southern Hemisphere).

This issue will reach you a little later than usual due to the fact that we only discovered a couple of weeks before we were due at the printers we had used for many years, that they had gone into administration. I first knew them as Information Press, a very fine and efficient printers. Following a takeover last year from Berforts Press there were clearly management/production issues which have led to the whole company closing. I particularly wish to mention my thanks to the customer services and production manager (he wore many hats!), Robin Hanks, with whom we had a very good working relationship, for all the help and support he gave New View over the years, often ‘beyond the call of duty’. So, we had to find another printer and set up things very quickly. This also means that we must find another solution for the mailing out of the magazine. Whilst we have always done the labelling and packing ourselves to keep the costs down, we have been sending out the overseas New View mail via the printer’s mailing room, using their much cheaper bulk mailing rates. This has saved us in the region of £5,000 per annum against the normal mailing rates we would have to pay and has been an invaluable help to keep the magazine going, as we have to raise money anyway each year to cover all costs. The generous printers’ mailing rates will be hard to replicate elsewhere.

This issue begins with Historical Conscience – From Uriel to Michael where Terry Boardman writes about the seasonal motifs of two of the archangels and a look into world events. With Managerialism – the Ideology Hiding in Plain Sight, Peter Snow comments on the often destructive result of introducing managerialist principles into situations where they do not belong.

The Body in Movement and Space features an interview with movement specialist Valerie Taylor, in which she explains her methods of working with the body to encourage healing. Margaret Colquhoun then shares an understanding of her own local landscape in the Borders area of Scotland and how we can relate to the land in Landscape as Countenance in Our Care.

Peter Snow then offers a second piece with his retelling of a part of the Legend of the Rood in The Foliate Adam and Rosslyn’s Green Men.

Towards a Social Art features an interviewwith artist David Newbatt, who has helped with illustrations in New View since I became its editor. Michael Steward then brings part two of his trilogy Bringing Myrrh to Myrrh Part II: H.D. and the Flowering Sophia.

Matthew Barton discusses some of the consequences of abandoning handwriting in favour of the keyboard in Reverting to Type; Paul White looks at a range of methods of pupil motivation in Classroom Management v Educating the Will and Richard house looks at why iPads and Babies Don’t Mix.

In An Anthroposophical Centre of a Different Kind Paul Emberson update us on developments in setting up a centre for researching electromagnetic sensitivity.

It just remains for me to wish you, the reader, well, wherever you are.