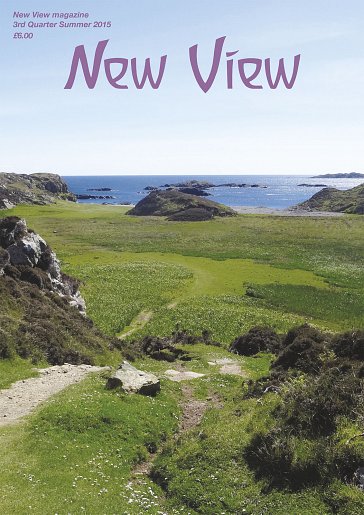 Welcome to the Summer issue of New View magazine (the Winter season in the Southern Hemisphere).

The front cover shows ‘Columba’s Bay’ at midsummer. So called because this is where the Irish-born monk and priest of that name landed with a group of followers in 563 on the southern end of the little Isle of Iona, situated off the west coast of Scotland. Legend tells us that Columba (521-597) was threatened with excommunication over a dispute he was central to, which eventually led to a battle and the loss of many lives. As an act of atonement he choose exile from Ireland and left on a pilgrimage to try to spread Christianity to as many souls as had died in the battle. In fact he achieved much more, because Iona was to prove the birthplace of a re-flowering of Celtic Christianity that was to spread right across Europe.

Celtic Christianity was always autonomous, individual, never serving any head of state, king, pontiff or patriarch. Many abbeys were founded throughout the British Isles and Europe in the third and fourth centuries and its clergy adopted the practice of being wandering missionaries up until the eleventh century, by which time the Roman Church had began to hold sway. From around that time Celtic Christianity gradually disappeared from view.

I am minded of some of the indications that Rudolf Steiner gave in referring to the ancient Celtic people. From his own spiritual research he tells of a group of people led away from the ancient civilisation of Atlantis who travel west to the area then called Hibernia (the classical name for the area now known as Ireland). These people then separated, one group remaining and the other continuing much further west. A long time later, history first records the Celts as coming from around Mongolia, travelling westwards and bringing their highly developed artistic culture with them. Eventually these people re-mingle with the descendents of those Atlanteans who had remained behind in Hibernia. This led to a new fructification and later, with the coming of Christianity to these lands, began the flowering of Celtic Christianity. Steiner also mentions, in his lectures published as The Mission of the Folk Souls, that the Archangel known as Michael (named from the known Christian tradition, but other cultures might know the work of such a spiritual being by other names) was once the angelic guide of the Celtic people. This being, Steiner asserts, was then given the task of being the guardian of Esoteric Christianity. I can well imagine that when the Celtic people ‘lost’ their guiding angel, they gradually became absorbed into the wider world community. Today, whilst the Celtic culture is recognised, there is no country that is called ‘Celtia’, or some such. I could imagine that a country needs an archangel to exist. Something to ponder upon. The Celtic peoples cradled into the world Celtic Christianity which, under the weight of the Church of Rome, gradually disappeared, like a stream going back underground.

Steiner gave enormous importance to the inspiration of Michael in his work with anthroposophy. When one considers that the heart of anthroposophy beats with Christian esotericism it may not be too fanciful to imagine that – following a spiritual pralaya – anthroposophy is the fully transformed, re-emerging stream in our time of that which disappeared after the flowering of Celtic Christianity and today works in the world, not as a religion, nor for any one particular people, but on behalf of the becoming, fully individualised, universally inspired, human being. And this is what New View supports and fosters.

And so, on our wandering journey we begin with Back to Buccaneering and the Jolly Roger? Economy, War and Peace by Terry Boardman; a look again to the East and the West’s relationship to it. We then include an extract, entitled What is the Human Being?, from a new book on dementia by Judith von Halle.

Midsummer by Charles Kovacs (who died in 2001 but left a treasure of unpublished works) and illustrated Recollections of John The Baptist by David Newbatt explore this seasonal theme.

A Child Meets Science by Salvatore Lavecchia looks at the challenging issue of accreditation.

In Bringing Myrrh to Myrrh: H.D. and the Aesthetic Christ we present Part I of a series of three articles by Michael Steward on the poet Hilda Doolittle which bring insight into the Christ mysteries.

John Marking then poses questions concerning the beginning of things with The Age of the Universe.

Vibhusha Delamore, from New Zealand, returns to the town of her childhood in the Scottish Borders to re-discover The Lost Garden of Penicuik– once the first bio-dynamic garden in Britain.

NNA News, compiled by Christian von Arnim, brings us a report on the work being done by volunteers to help traumatised victims in Northern Iraq. This is followed by The Darkness in Our Time: The Poetry of Ted Hughes by David Donaldson, a response to a previous book review in the Winter 2014/15 issue of New View.

Many people might like to read, and even share with others, Charles Kovacs’Signpost to Rudolf Steiner: An Introduction to his Life and Work. Finally, Neil Franklin reminds us of the life and work of The Reverend Professor Hermann Beckh, a contemporary of Steiner.

We continue to fund raise to keep New View going, so please keep us in mind – and our grateful thanks to those who have already given support these last months.

Wishing you, the reader, well, wherever you may be,