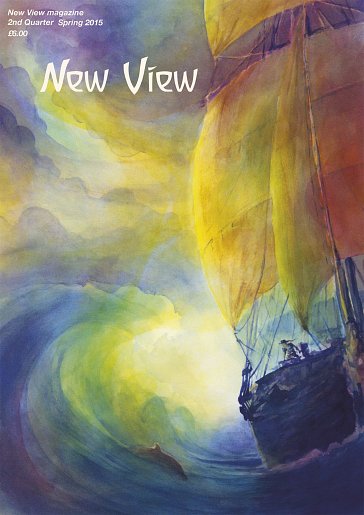 Welcome to the Spring issue of New View magazine (Autumn season in the Southern Hemisphere).

The front covers of New View are always a challenge to me as editor: How might a cover image reflect what is in the magazine and also connect the reader to the time we live in and the events that are confronting us, not only as a global community but also as individuals? Can a cover image make us particularly mindful of something upon which to ponder, in its widest and deepest sense?

I thought I would share how the cover of this issue came about.

The weekly American Waldorf Today magazine website always has a display of art primarily created in the many Steiner/Waldof schools around the world. We first saw this picture on their website in 2013 and we liked it then. For some reason it came back to my mind whilst preparing this issue of New View. We contacted Waldorf Today and they told us that it was an image of a painting sent into them by Hawthorne Valley Alkion Center (New York State) that teaches anthroposophy, art and Waldorf teacher training. The picture was painted some seven years ago by Abraham Madey, who graduated as a teacher from Alkion Center and went on to teach Math and Physics at the Hawthorne Valley Waldorf School (where he was also once a pupil). We tracked Abe Madey down at the school and he kindly provided an image and permission to place this on our front cover. Abe has been painting with water colours for some 20 years. He described the picture to me as: “a remembrance of the time I spent working at sea under the billowing sails of a square rigged ship then called the HMS Rose (though it is not a picture of the Rose per se). If asked what the impulse behind the image was, I would say it was to express the tensions between water, wind and light that arose around the ship in the image.”.

When I look at the ship confronting the forces in the elements, my eye is drawn to the dolphin which even in the midst of the storm carries something calming with it. A gift from the sea that the sailor observes from the ship. There is much to ponder on in the depth, the colour and the forms of this painting.

In the editorial of the Autumn 2014 issue of New View I asked readers what they thought of folk spirits. Jehanne Mehta offers a response with Albion and the Spirit of Britain followed by a song she has written about Albion.

Terry Boardman then looks at Britain’s involvement in shaping the Near and Middle East and introduces a hardly known historical figure who played a crucial role in shaping the Arab lands in William Shakespear – Saudi Arabian Pilgrim.

Thoughtful about recent events in France, Trevor Dance looks at some examples of art that have shocked in their time in Charlie Hebdo, Iconoclasm and the French School.

With news reportage affecting many of us, Paul Carline looks at journalism, truth and propaganda in Truth in Journalism.

The land as a theme is then entered into with Martin Large writing of the importance of ‘entrusting’ land for the farmers of the future and how the biodynamic movement has been at the forefront of working out of a threefold picture in Securing Land for Biodynamic Farms as Green Oases: Applying Rudolf Steiner’s Social Thinking. This is followed by Kathryn Aunger writing from Canada who introduces a new planting calendar for biodynamic farmers and gardeners in Reviving Ancient Planting Practices.

The fascination with computers, the pressure to introduce them in schools and their role as subject matter and learning tools is considered with the informative and insightful contribution by Richard Brinton: Finding the Computer – A Pedagogical Exploration

The Managers is another humouresque by Peter Snow featuring the two ‘gentlemen’ Maltravers and Carr-Moffit; yet addressing serious issues as all good humour can.

Dorothy Marlen then writes about her journey towards establishing an accredited course in Holistic Baby and Child Care in A New Vision for Early Childhood Care and Parent Support.

NNA News around the world, compiled by Christian von Arnim, reports on a Rosicrucian conference held in Kassel, Germany and the death of the founder of Nonviolent Communication, Marshall Rosenberg.

Dennis Klocek, writing from the USA, brings a very deep introduction to The Alchemical World View that would repay careful reading.

The Fate of Joseph Knecht by Alan Jackson is an extract from his recently published book Sparkle, Assassin, illustrating the narrow-mindedness (even closed minds) of much of the scientific fraternity.

We only occasionally feature obituaries, but we are glad to do so for Jimmy Anderson MBE, an early pioneer of biodynamics in the UK, who died in February.

Like the dolphin in the picture, the gifts from the wider ‘sea’ of readers remain a great help in keeping the ship ‘New View’ afloat… the life raft is always close at hand, so my continued thanks to you all.

Wishing you well, wherever you may