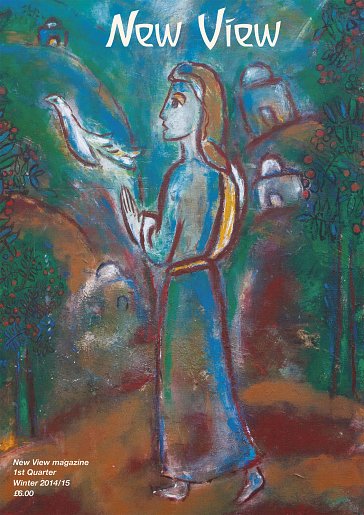 Welcome to this Holy Nights issue of New View. Here, in the North, the winter sets in; to the South, the summer sun warms the lands and seas. For everyone the old year turns and a new one begins. What will 2015 bring towards us personally and collectively in our various communities?

I call this the Holy Nights issue of New View because those nights and days between Christmas Eve and Epiphany, on January 6th, when the coming of the Three Kings is also celebrated, offer a time for reflection, taking stock and a looking ahead unlike any other period in the year.

But more than this, insights as to directions in life and decisions one is having to make are often helped, inwardly, at this time, if we can be awake for it. This is surely because there is an esoteric purpose, a potential for insight and understanding, that comes much closer to humanity at this time. Its reality has to be experienced, personally vouchsafed and acted upon for a different future. Essentially it calls for a right understanding of Christmas, its meaning for the whole of humanity, not only for some practising Christians.

In a small way, to help support a better understanding of the meaning of Christmas, I decided to republish an article that first appeared in New View some fifteen years ago. This was prompted by the latest series of paintings by the English artist, Greg Tricker on the theme of St. Bride of the Isles – the front cover image is also from this series. The Legend of St. Bride as retold by Jean Lynch is a special work, for she spent much time drawing together the various important esoteric elements from the various extant versions of this tale and weaving them into what, on the surface, appears as a simple narrative, but has profound depths if one lets it draw you closer.

New View’s ‘artist in residence’ David Newbatt offers The Three Kings, a short commentary on his illustration for this festival that, according to Rudolf Steiner, should increase in importance and belongs to our human future.

Who’s Winning? or Following the Child’s Path Instead by Richard Brinton is an insight into the child’s world that adults can all too easily overlook. This article is illustrated by his daughter, Ilona.

Paul Emberson, from Switzerland, writes about the challenges presented by modern technology in Electromagnetic Hypersensitivity Syndrome and a new initiative he hopes to bring about to help research this problem.This is complimented by Zephir Delamore, from New Zealand, who, in the tradition of all good cartoonists, offers a cartoon with humourous, yet serious, insight.

Biologist Yvan Rioux in Beyond the Gaia Hypothesis – to East and West then brings a fascinating journey full of insights concerning life, energy and wholeness.

Jonathan Knight and Ann Hutchinson, write from the Western Isles of Scotland about their personal experiences of coping with Parkinson’s Disease.

This is followed by News Network Anthroposophy (NNA) News around the World compiled by Christian von Arnim.

Education as a theme then opens with Secular Spirituality? The Future of Steiner-Waldorf Education by David Donaldson, followed by Richard House writing on efforts to transform the kind of education offered by modern universities in Re-imagining the University.

The Poppies of 2014 – Goodbye To All That? “Blood-swept Lands and Seas of Red” by Terry Boardman is a culmination and a drawing together of themes he has written this last year concerning world events.

Peter Snow reviews the film The Imitation Game directed by Morten Tyldum and starring Benedict Cumberbatch, that offers much food for thought.

Two poems are also featured in this issue – The King by Alan Jackson and Meditation by Eve Kaye.

Concerning the future of New View; as many readers are aware, we constantly fund raise to keep this initiative going. Many of our readers also belong to the Anthroposophical Society in Great Britain and they encouraged me to seek some funding from the Society to help New View for two or three years and finance the redevelopment of the website for an online version and an archive of all its articles. I first approached the council of this Society in 2011.

Overall it proved a long process through a number of constellations of council members. The most recent constellation generously gave New View help with its printing costs for three of the last four issues whilst they continued considering the requests. But finally, in order to bring this long process to a close, I withdrew my requests, at which point the council responded that they would not financially support New View in any further way. I respected this decision and thanked them for the support they had given which has been a great help.

Getting more subscribers is the way forward, but that takes time and finances to bring about. Therefore, New View once more looks to its general readership – who have been absolutely wonderful in keeping us afloat these past years – for any financial support that can be given over and above a subscription.

Finally, on page 41, David Newbatt has illustrated a ‘Christmas card’ for all our readers, in both hemispheres, North and South!

Wishing you well for 2015, wherever yo