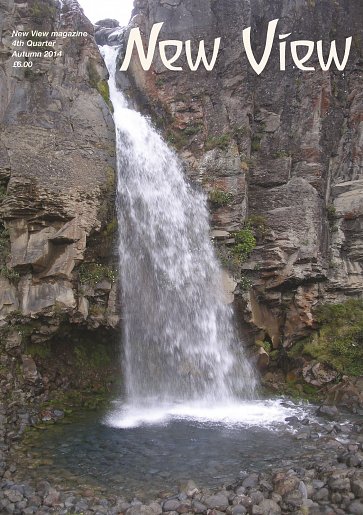 Welcome to this Michaelmas issue of New View. This particular issue was finished whilst staying in Edinburgh, Scotland, where I was able to experience something of the mood whilst Scotland voted on whether or not it would become an independent country from the United Kingdom of Great Britain and Northern Ireland.

Over 85% of those eligible to vote (some 3.6 million people) turned out to cast votes on the 18th of September. On the morning of 19th it was announced that Scotland would remain united with England, Wales and Northern Ireland by 55% to 45%. This was a peaceful process; no civil war or unrest. What a fine example of how to deal with such a mighty issue. The Scottish people are to be commended; their’s is a light that may yet shine more deeply into struggles in other countries of the world.

There is a tangible sense that the process and innumerable debates and conversations concerning Scotland’s independence which had taken place both within and without her borders may eventually change the political landscape in Britain. Certainly there has been an awakening to the political processes by the general public; the hope is that this may last and develop and that people will not sink back into their relative slumbers. Without a proper engagement with those who govern – ostensibly, it must be said, on a population’s behalf (always a moot point this one) – there will be no real social justice. The will of the few cannot rule the many ad infinitum; but that is nearly always the case at present. Scotland’s soul searching for a right way forward has, I believe, offered a stimulus and an opportunity for this engagement to become more conscious in Britain.

This event also led me to ponder what the 19th century artist, poet and visionary William Blake, or rather his spirit, would have made of all this. In his complex mythology, ‘Albion’ is not only the name Blake gives to primeval man, but also as an ancient synonym for Britain – Albion as the spiritual personification of Britain. Blake spoke about the “awakening of Albion”. Is this a being who has to awaken in people’s inner life? And here one may consider – particularly in the light of Rudolf Steiner’s many indications on the subject of the ‘Folk Souls’ and the ‘Folk Spirits’ – what is the guiding spiritual presence in Britain? What of the ‘Folk Spirits’ who stand behind a people’s, a nation’s, development? Are there separate folk spirits for England, Wales, Scotland, Northern Ireland (and what of the Republic of Ireland)? What are the spiritual tasks of the people who make up Britain today? What do you as a reader make of these questions? (Also, for our overseas readers, these questions in relation to other countries?) These are serious questions that I invite New View readers to ponder on and, perhaps write to me about personally or, possibly, as an offering for publishing in New View.

I mentioned social justice earlier. How can society be organised to bring this about? With this in mind, this issue of New View begins with a contribution from Ilya Zilberberg exploring Steiner’s attempt to approach this question with The Genesis and Understanding of the Threefold Social Order. Terry Boardman then writes about affairs in the world and the concomitant struggles between peoples with different world views in _Rhodes, Russia and the Islamic State._Peter Snow’s brief humouresque, Absurdly Simple, complements and yet highlights the seriousness of this.

We then take a retrospective journey with the erstwhile pilgrim, Matthew Barton, in A Journey from Easter to Whitsun, where we share some of his experiences when, earlier this year, he left his home in Bristol and walked for many days and nights north, then west into Wales – and back again.

Writing whilst travelling in Europe,Anastasia Palmer shares a remarkable inner journey coming to terms with ME and being led to eventually hand craft and write a book of her experiences in Dear Stranger

The Camphill movement is experiencing many changes, both in Britain and abroad. Maria Lyons offers some perspective and insights on this as well as introducing a research initiative with Camphill, Community and Research: an insider-outsider perspective.

The artist and resident New View illustrator David Newbatt offers A Michaelic Picture, with a short commentary. This is followed by NNA News around the World compiled by Christian von Arnim.

Embracing Dying: About a new training in Care for the Dying by Cathie Green and Robert Lord informs us about a new initiative concerned with the important social and personal issue of how we approach and cross the threshold of death.

Then it is back to Scotland, up to the north-east, with A Steiner School in Moray, Scotland, compiled with contributions from Geoff Dalglish, Krzysztof Zajaczkowski and Katrina McPherson. Whilst this article takes a glimpse at one particular school, it has universal aspects to it which many such schools around the world can surely recognise.

The need to fundraise to help make financial ends meet continues – any contribution is gratefully received.