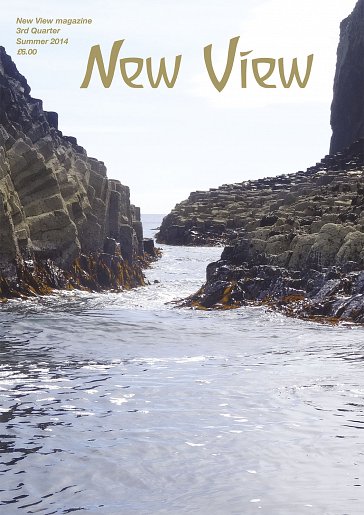 Welcome to this issue of New View, at the time of the festival of St. John. As I write this editorial, Midsummer’s day has just passed, here in the Northern hemisphere.

New View comes out during each year around the four Christian festival times of Easter, St. Johns Tide/Midsummer, Michaelmas and Christmas. These festival moments form a cross in time upon which the continuous cycle of the year is carried and made more visible. Yet, like the Celtic Sun Cross, the festival moments themselves also form their own circle of renewal on the cross of the world, our Earth. We orientate ourselves upon the the Earth through the four cardinal directions of the compass points; North, South, East and West. The Cross of the World is formed, for each of us, though the meeting of the the horizon, a horizontal line, when crossing the verticality of our own uprightness, standing upon the Earth. This crossing of the horizontal is also experienced in nature with its manifold ways of vertical striving – from the great tall trees to the humblest green shoot – to reach up from the Earth towards the instreaming light of the Sun. These two great crossings of the world horizontal and vertical are completed by the human engagement in the ‘encircling round’ of humans communing with the world and one another, a streaming forwards and outwards from the feeling heart. In this way the three directions of space are encompassed in our existence as incarnate beings. To be here on the Earth and exist in a physical body, ensouled by feelings in-formed by a unique spirit marks out each of us as an individuality.

The festival moments are a time to remember and come closer to understanding our time here on Earth, this strange physical experience which carries so much, and what we can each make of it. Festivals also offer a space where people can meet and share togther, renewing a sense of human community.

Looking into the world today, one is very much confronted by the struggle of people to form community and live and work together: in personal relationships, family, neighbours; nationally as part of a country’s community and internationally with all the other countries of the world. We are each an individual but we are challenged to understand what communing – forming a relationship to the ‘other’, community – really is. By a genuine interest for this we find ourselves in the foothills of a great journey towards a lofty summit; to know what love really is. What a challenge!

In this issue of New View, itscontributors form a community offering insights and experiences towards finding a better understanding of the world and ourselves. Terry Boardman begins the journey through this issue by bringing a deeper, historically informed, background to the events unfolding around the issue of Scottish independence that will be voted on in September, with Thoughts on 1914 in Relation to Scottish Independence and the Future of Britain.

David Newbatt, writing (and drawing and painting!)from Scotland then offers an artwork and an insight into this time of St John with The Bigger Picture.

Paul Emberson from Switzerland (and also Scotland) then explores how to develop ‘etheric technology’ in Working with the Forces of Life. This is complemented by Lasse Johansson writing from Sweden about A Journey into the Mysteries of Water. The etheric, the forces of life, manifest everywhere, is a mystery awaiting our moral engagement.

NNA News around the world, compiled by Christian von Arnim, looks at events in Norway and China underpinned by an anthroposophical world view. Eric Fairman shares experiences with children and education in Steiner-Waldorf Education in Nepal. Benjamin Cherry also looks at Steiner /Waldorf inspired education in China and his ongoing experiences in that part of the world with Resurgence in China. Then we travel to South America and Argentina, with Christopher Houghton-Budd and a look at ways of financing young people to run initiatives in Birthplace of Youth Bonds.

Picking On Pockets by Peter Snow, writing from Scotland, offers a little oasis of humour before we continue our journey with Richard Cooper writing from Switzerland about Agenda 21: ‘Sustainable development’ or Media Smoke and Mirrors.

Paul Carline writes from Scotland about the insidious approach to force commerce, backed by legislation, upon Europeans in TTIP – Transatlantic Trade and Investment Partnership. [The same process as TPPA in the Southern hemisphere]. As in Richard Cooper’s article, there is so much that the man and woman ‘in the street’ needs to become aware of. Rudof Steiner maintained that we all need to be ‘well informed’. That is a great challenge in an age of enormous amounts of information and mis-information mixed together. New View wants to play a part in clearing a path through this.

All this is given deeper context by John Taylor, who died in May this year, in Western Australia. One of his last wishes was that New View would publish an essay of his, in two parts, relating to world events and education and so we publish The Social Impulse Behind Waldorf Education Part I. Part II will appear in the Michaelmas issue. This issue then concludes with The Karma of Untruthfulness Revisited, by Terry Goodfellow. This concerns seminal works by Steiner, published in two volumes that were born out of the events unperpinning the First World War and are of the utmost relevance to the times we are now living through. New View exists, still, due to the continued generosity of its readers. Wishing you well, wherever you are,