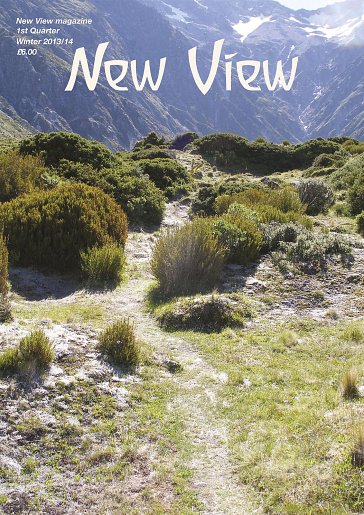 Welcome to the Winter (Summer in the South) issue of New View magazine. As I write this editorial, it has only been a few days since the world learned of the passing of Nelson Mandela. There is so much to be impressed about with this human being. For myself, the way he was able to turn away from violence – for he had embraced this as a young man, seeking justice in his land – and walk the path of peace and begin to unite and heal a nation of people, is nothing short of inspirational. And constantly so. And, of course, he led by example. Every step for others starts with oneself. Then there was the man’s smile; he really shone out into the world, you cannot fake this. Boys and girls growing up need heroes and heroines to help inspire their steps into life. Nowadays, so many young people look to participants in sport, music, TV and the like for their inspiration, yet often not for any moral quality, but rather more for the fame and adulation that talent and achievement bring in our modern world. To find a politician with such a deep moral quality, offered in such a humble way, is all too rare and an enormous achievement. Mandela brought goodness into the world and was also a signpost, pointing to a way through life.

The front cover of this issue shows a barely discernible path, but it is there, leading into the mountains. Quite a metaphor for life. Each tread we make on the earth is supported by the very ground under our feet, as we undertake so many journeys and try to find the meaning of things and come to know ourselves. In As You Like It, Shakespeare put it this way: “All the world’s a stage, and all the men and women merely players; They have their exits and their entrances, and one man in his time plays many parts, his acts being seven ages”. But what a stage!

The front cover is also something of a collector’s item, as, apart from the Title, there are no other words to indicate what the prospective reader might find inside. The image just did not accept being written on – the words, in whatever colour, were not really very discernible as the foreground is rather light and only in the shadows was something possible; in the shade of a tussock, a shrub or some such – so it is the first time, ever, in 70 issues, that New View asks the reader to take a step into the unheralded, relative unknown! But, if you are reading this you have passed that threshold, so a warm welcome and now I can tell you a little more of what awaits in these pages.

2013 marked the 50th anniversary of the publication in Britain of Silent Spring, Rachel Carson’s stand against the pollution of the earth and its people by indiscriminate chemical spraying of the land. Sadly, her voice is as necessary today as it was fresh and urgent all those years ago. Vivian Griffiths gives some background as to how her book came to be published in the UK (a year after its first appearance in the USA) in How ‘Silent Spring’ came to Britain. This is complemented by Marcia Phillips, an American Parks Ranger with a lifelong interest and activity for the protection of nature in The Voice of Rachel Carson.

Judyth Sassoon shows a way to understand phenomena, especially of living things, in Goethe’s Qualitative Science. His inspiration is behind the next article,Planting a Goetheanum, byBernard Jarman. This follows up his article about this subject from the last issue of New View.

The Foundation Stone Meditation, a translation from the German by the Americans James Gillen and Richard and Patricia Bloeden, is published in New View, perhaps timely, but also in part as a tribute to James Gillen who suddenly and sadly passed over the threshold in November. Also from an American, Donna Simmons writes about her journey and time spent at a conference in Auschwitz.

The Knight, the Nobleman and the Monk, is an insight into inspiring qualities we can strive to find in ourselves, by Annelies Brüll. She also inspired artist David Newbatt to explore this in _The Knight, the Nobleman and the Monk in my Art._We then look around the world a little with NNA News for New View, compiled by Christian von Arnim. This time we hear of events in Germany and the Philippines.

Richard Bunzl asks us to consider how we understand relationship through thinking in A Subject for Further Research. This is followed by the second part of Terry Boardman’s exploration of events unfolding in Syria and the deeper historical and spiritual context to this. It is a deep insight and will take any reader on quite a journey. Syriana Part II will, I am certain, fully repay the time taken to read it.

In education much is in flux here in Britain. Joe Evans speaks about the new impulse from the government to financially support Steiner academies (for children up to the age of 18 or 19) in Everything has a Beginning: The Birth of a New School. And finally, Andrew Wright brings us insights that are deeply relevant today through Charles Dicken’s Barnaby Rudge (A novel of 1841).

As the year turns to 2014, I wish to thank, deeply and sincerely, all those generous souls who helped to keep New View afloat through their donations; it has only survived this far because of this. If I could have a New Year’s wish, it would be that every current reader of New View might each gain one new subscriber for the magazine. Not as a gift subscription (yet these are always welcomed) but rather finding a new reader who will buy their own subscription. Not easy to ask for and not easy for everyone to do, but this would finally take away the need for my begging bowl. I believe this is a magazine that many, many people would find value in.

And to you, the reader, the very best wishes for the New Year and the way ahead, wherever you may be.