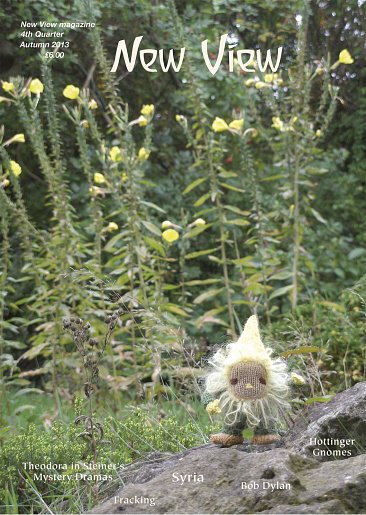 Welcome to the Michaelmas issue of New View.

With this issue I complete 15 years as editor of this magazine. When I first took this work on – more of a vocation than a job – there were two themes in particular I wished to see more widely addressed: Esoteric Christianity and the Elemental world. Neither of these is particularly easy to write about, but over time New View has been able to carry a number of articles that I hope have raised consciousness and deepened understanding for these important realities. Of course, that last phrase is very challenging in itself, "important realities". For those who can claim actual experiences, then Christ and elemental beings are self-evident. Others inwardly sense the rightness of the existence of such entities without any clearly definable experiences. And herein lies the challenge, for most of the world would simply deny the existence of Christ and elementals as misguided beliefs and superstitions, especially as we live in a modern culture driven by an adherence to understanding predicated upon weight, number and measure. There is scant regard for other qualities and insights that Rudolf Steiner spent a lifetime opening up to people's consciousness. The challenge is to remain open to test the findings of a spiritual scienceand rediscover the context of the realities informing life and the truth of our experiences of it. New View holds to this challenge.

In Syriana? – Part 1, Terry Boardman helps us to understand the deeper background that has led to the recent events in the troubled Middle East. This is complemented by Peter Snow's humoresque, Keeping it Rational, which has a serious intent, depicting an imaginary pair of civil servants demonstrating how 'complicated' are the events unfolding in Syria.

With Fracking, currently a topical and controversial issue in many parts of the world, Paul Carline takes a look at what is driving the rush to implement this toxic process of shale gas extraction.

Bob Dylan, a man with a social conscience, is someone whose songs are known all around the world and Christopher Hudson shares some personal insights on a number of Dylan's songs, drawing Christian parallels from his lyrics in The Psalms of Dylan. James Gillen, like Dylan, from the USA, offers a new translation of Rudolf Steiner's Motto of Social Ethics.

Marion Vane then tells of her 33 day journey to Santiago de Compostela in A Pilgrim's Experience of the Camino de Santiago. Matthew Barton is also planning a journey and asks for readers' help in A Journey from Easter to Whitsun.

Seamus Heaney, the Irish poet and playwright, received the Nobel Prize for Literature in 1995. Christopher Hudson was moved by news of his recent death and explores elements of gravity and levity to be found in the poems of this much-respected man in Seamus Heaney and Bearing The Light.

In NNA – News for New View Christian von Arnim, who runs the News Network Anthroposophy, brings us a number of reports from around the world: A move in Switzerland to bring in an 'unconditional basic income' (UBI) for all citizens; the activities of the 'emergency education team' of the international Waldorf organisation Friends of Waldorf Education in strife-torn regions of China and the Lebanon and a success story involving self-sufficiency in rice-growing in the Philippines, from where biodynamic rice is now exported.

Alfhild Wilkes then tells us how she became connected to gnomes and the background to her creating specially knitted ones for people in The Hottinger Gnomes – and my connection to them.

This is followed by Funding Land and Property for Initiatives, where Sebastian Parsons shares with us a new model of acquiring and preserving land, freeing up the value of the land and vouchsafing it, for future use, through a Community Benefit Society.

Richard Ramsbotham offers some strands in his own biography that brought him into connection with the life and work of a Russian in The Art of Books and The Art of Life: Encounters with Andrej Belyj.

David Wood from Germany produces his final essay in New View about the identities of some of the real life people who inspired Rudolf Steiner's characters in his Mystery Dramas. Theodora's Prophetic Revelation: The End of Kali Yuga and the Dawn of the New Michaelic Age is a scholarly work.

My thanks also once again to David Newbatt for the sketches and drawings sprinkled throughout this issue.

Regular readers will be aware that New View has been struggling to stay afloat financially for some years. It is only the continued and heart warming financial support from readers that has, so far, enabled this magazine to keep going. Some in America have been particularly generous. But I do not wish to continuously hold out a begging bowl. Therefore, my 15th 'birthday' wish as editor is to see New View financially stable. I am re-doubling my efforts to see if I can somehow finally attract the one thing that will make a difference: serious funding for a marketing exercise to connect New View to sufficient new readers (there must be enough of them in the English-speaking world) to at least double its existing subscriber base. That would take us into solvency. Although this would come about if every existing New View reader 'found' another new reader, not every reader is in a position to do such a thing. Over the years we have tried what we can, but I am reliably informed from the business community that it requires serious finance to bring about such a doubling of the circulation. I will keep you informed!