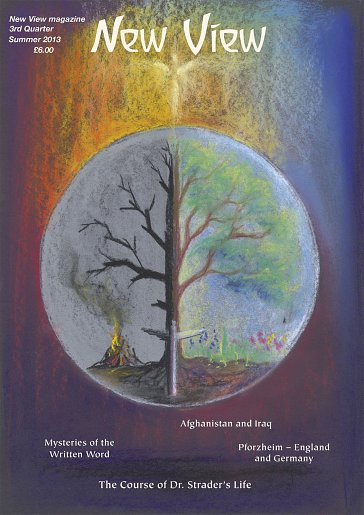 Welcome to the Summer issue of New View (Winter in the Southern hemisphere). It is St. John’s Tide. Everywhere one looks in the world changes are being sought; personally and in community. The ‘Arab Spring’ was the phrase coined for a wave of revolution and protests in the Arab word and is now used, wherever civil protest occurs, to describe a common recognition and desire amongst groups of a country’s population for change. The most recent occurrence was in Brazil where hundreds of thousands took to the streets to protest about how their government spends its money, seemingly ignoring the many people who are at a poverty level.

So it seems apt to reflect for a moment on the message that John the Baptist brought when he returned from the wilderness to preach of the coming of Christ. This is in many ways encapsulated in the greek word ‘Metanoia’ meaning ‘change your ways, change your thinking. John went further in proclaiming that with the coming of the Christ all would be made new. In other words people were challenged to let go of their old ways and open a new consciousness. This is a process that continues unfolding for humanity, for a long time to come.

At midsummer, following the Summer solstice on 21st June, fires are traditionally lit in many cultures to celebrate the midsummer moment, the time of longest daylight. Many people are invited to jump over the flames of these fires and symbolically let go of outworn habits and concerns, transforming them in the upward reaching flames. Such traditions stretch deep into the pagan past and have been joined by the Christian celebration of the birth of St John the Baptist. Of course in the Southern hemisphere the seasons are reversed and St. John’s Tide occurs in midwinter. Here we can perhaps see that a new consciousness is called forth to work with such a festival when it is not supported by the season as in the North and takes on a more inward aspect. Change is an intimate thing; it belongs to each person to effect it in their own way. It is the creative process wishing to be made manifest.

Perceptions, when founded on inadequate concepts, even prejudices that could be changed or let go of, often mislead us and when we take something out of context it can suggest to us the opposite of what the truth actually is. With this in mind I decided to ask Richard House to revise an article we published in New View in 2004 concerning accusations of racism against Rudolf Steiner, that continue to occur.In _A Refutation of the Allegation of Racism_against Rudolf Steiner he shows that such allegations have no basis. He also importantly points out how our consciousness of things has also changed from Steiner’s time. A fact that is so often overlooked.

Terry Goodfellow then takes an historical look at what was behind the invasions of two Middle Eastern countries in A Retrospective: Afghanistan and Iraq. Terry Boardman writes, in a wide ranging way, about how our thoughts can be freed from inherited bonds in Removing the Mind-Forg’d Manacles. Matthew Barton then shares a meditation in The I in Quiet.

In Twinned with Pforzheim, Germany Hannah Townsend looks at the spiritual bond between England and Germany and relates a story of forgiveness. Jeremy Weiss shares an idea that involves the local community in growing vegetables and fruit in Valuable or Invaluable? Bernard Jarman informs us about an unusual tree-planting project taking place in the West Country of England in Green Goetheanum in Somerset.

Naomi Brandel shares a heart-warming story and thoughts about how technology impacts on our ways of connecting in communities with Dealing with it Together. Christian von Arnim offers a compilation of some newsworthy items from around the world received by News Network Anthroposophy in NNA - News for New View.

Richard Bunzl then compares the qualities between the printed, the virtual and the handwritten word in Mysteries of the Written Word. Whilst,in Rhymer Recants, Shindig Rhymer has a tongue in cheek prod at humour, we hope!

Finally, David Wood in Germany offers the reader an insight into the identities of a character from one of Steiner’s Mystery Dramas in The Course of Dr. Strader’s Life: The Open Biographical Secret of Rudolf Steiner’s Drama Character.