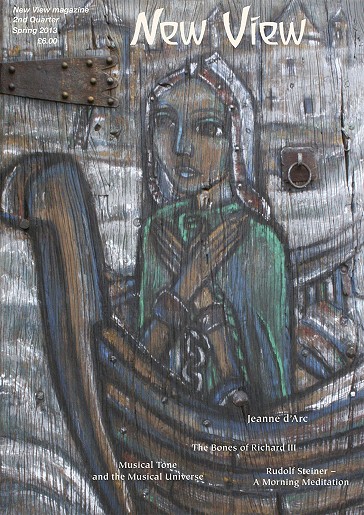 Welcome to the Spring/Easter issue of New View magazine. My apologies for the slightly late arrival of New View as we had a run of illness (many people had ‘bugs’ of one sort or another coming out of winter here in the Northern hemisphere) and a degree of uncertainty about the financial future of the magazine. In all other respects the initiative is robust, many readers value what New View brings, offering as it does a focus into the English speaking world for Steiner’s anthroposophy (although a number of non-English people also subscribe… we are read in around 40 countries outside of the UK, albeit in small numbers). My endeavour is to hold New View together as long as possible. I have to take seriously what Steiner said about the necessity in our times “to live with uncertainty”!

The front cover picture might well illustrate the quiet inspiration we need to approach our challenging, uncertain times. It shows Joan of Arc (Jeanne d’Arc) crossing the Somme river in France on her way to her eventual trial and death – she was burned at the stake in Rouen on 30th May, 1431. The artist, Greg Tricker, has somehow captured in his depiction of the young girl (she was only 19) a certain peace and maturity as she goes towards an uncertain fate, perhaps mindful of fulfilling her destiny in help free France from the English armies. If ever there was a Michaelic deed, hers stands there in history as an inspiration to many.

This issue begins with an article by Paul Carline, The Nature of Things, where he looks at Science and the travails of nature, the elemental world, and sheds some light on our relationship with our earth with particular reference to the writings of St. Paul.

King Richard’s Bones and Britain’s Future: Lion, Hart and Boar by Terry Boardman looks, with an historical context, at the significance of the recent find in Leicester, England, of the bones of King Richard III and the strong resonance between his time and ours.

Musical Tone and the Musical Universe is an exploration of a sometimes difficult subject by Richard Bunzl to help understand what is at work when we hear music.

When I first became editor of New View we featured some beautifully written vignettes about nature in Snowdonia, Wales (Snowdonia Sketchbook) that Judy Harris contributed. So it is with some pleasure that we share with the reader a little tale she sent us: The Buzzard, the JCB and the Driver.
Terry Boardman then offers a brief historical context with Joan of Arc – a short history which leads directly into a look at some of the most recent work of Greg Tricker: Jeanne d’Arc – The Art of Greg Tricker

Christian von Arnim has again compiled an interesting mix of items from around the world with NNA – News for New View.

In A Morning Meditation, Matthew Barton brings a sensitive insight into one of Steiner’s meditations, contrasting aspects of it with a work of the poet Gerard Manley Hopkins. This is followed by On the Train to Kings Cross, a moving experience, perhaps a signature of our time, shared, and illustrated, by Hannah Townsend.

Dr. Basil Williams, writing from the USA, offers a broad insight, born out of many years of experience, with A Spiritual Scientific Understanding of Autism.

Finally, Angus Jenkinson writes with interesting insights into modern thinking with Christ in Me and the Meme of Memes.

My grateful thanks to all these authors and the poets who appear in this issue – and, as ever, to David Newbatt who produces such helpful illustrations, so often at the ‘eleventh hour’.

It remains for me to wish you, the reader, well, wherever you may be.