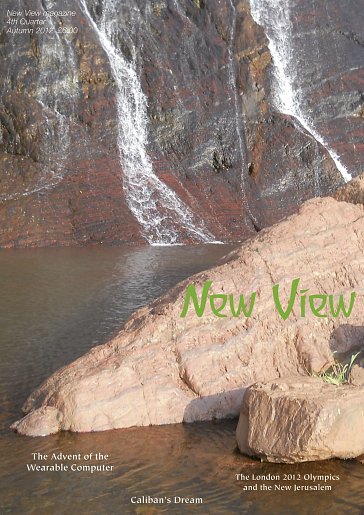 Welcome to the Autumn (or Spring depending where you are) issue of New View. Something happened in Britain recently that filled the nation’s media.

It was 23 years ago. There was a football game between Liverpool and Nottingham Forest. They were playing in a Cup game on a neutral ground, at Hillsborough in Sheffield. There was a fence, a barrier, separating the playing area from the fans, behind which many people converged. Too many, too quickly. A crush developed and 93 people were killed, many of them young children. It was the worst sporting accident in British history. What compounded this tragedy was that the police, and certainly at least one member of government at the time, falsified the ensuing reports to place the blame for this accident on the behaviour of allegedly drunk and disorderly Liverpool fans, thus diverting criticism from any poor and under-prepared responses to the disaster by the police. This telling of events was resisted strongly by the families and friends of the dead Liverpool fans, indeed by many in the whole city of Liverpool. Eventually, an independent panel was set up. On 12th September 2012 their report was finally published, totally exonerating the Liverpool fans and making it clear that the authorities had falsified evidence to deflect attention from their unpreparedness on that day and lack of adequate leadership when swift decisions would have averted the full scale of the disaster. So the truth was out. But it took 23 years.

The word truth, often writ in large letters, appeared on the front page headlines of all the national newspapers as the findings of the report were conveyed. What is of concern, and no little interest, is that those people who had campaigned to have this event properly investigated were often dismissed as ‘conspiracy theorists’. But, on this occasion there was a conspiracy. So what might this mean in future?

Certainly here in Britain, for a moment, the phrase ‘conspiracy theory’ – often used to quickly denigrate the thoughts of anyone holding an opinion contrary to ‘official’ or ‘popularly held’ statements or beliefs – is being treated with a little more circumspection, even dignity, than usual. There are conspiracies at work in human affairs and truth remains a prisoner to a wider conscience until it is freed to be properly heard and understood. Yet, to come to one’s own independent judgement about any matter can be extremely challenging. But surely it is the challenge we all must take up to remain honest to ourselves and the world. And what a gift it is to be able to say, when it matters; I was wrong, I was mistaken. A meant and honest apology can be a great healing force in community. The media can, at its best, by holding up these mirrors of events to the wider world, raise awareness, giving conscience ground upon which to play a part in our lives.

New View endeavours to raise a deeper awareness amongst its community of readers for the truth of how things are; but that is a journey of discovery for us all; sometimes there are no easy insights. There also exists a darker side – the manipulation of the truth through lies and propaganda – that we all have to deal with.

So, what is in store in this issue of New View?

Terry Boardman, after a recent visit to Japan, shares some of his observations on that country and how he experienced his return to England, in Caliban’s Dream. Jeremy Naydler then brings us a vision of what the future holds by way of technological developments in The Advent of the Wearable Computer. Similarly, in Technology, Thinking and Our Sense of Life, Richard Bunzl shares the importance of our ability to sense the difference and the balance between the life and spirit in all that is around us, and death.

Why New View? finds Frances Hutchinson sharing her thoughts on economics and social threefolding and its affects on society. This is aptly followed byDanrog the Hoarder where Shindig Rhymer brings his special brand of humour and irony (although he may not be aware of any of that) to the subject of philanthropy.

Fresh from a recent threefolding conference, Simon Blaxland-de Lange looks at threefolding principles in social life in The Time is at Hand for a Second Chance for Threefolding. Completing this theme, Christopher Schaefer, from the USA, highlights the consequences to society of the widening gap between the rich and the poor in Toxic Excess: Income Inequalities and the Fundamental Social Law.

Talking of the poor, the editor highlights New View’s Uphill Struggle to keep its head above water in these financially challenging times. With thanks to Zephir Delamore for his graphic humour!

Puppetry in South Africa, finds Elizabeth Reppel reporting on a project in the Western Cape, teaching and presenting the art of puppetry in the poverty stricken communities of this region.

Back in the UK , the British government controversially carries out badger culling in the South West of England in an attempt to reduce the incidences of bovine tuberculosis.Bernard Jarman looks at this in TB, the Badger Question and Biodynamic Farming.

In Open Secret, Charles Lawrie looks to the English poets who have shared their experiences of the presence of the Etheric Christ.

Finally, in The London 2012 Olympics and the New Jerusalem, Richard Ramsbotham explores what he experienced with the Olympic ceremonies and their symbolism.

Dark roots and green shoots, as ever, in this issue.

Wishing you well, wherever you are.