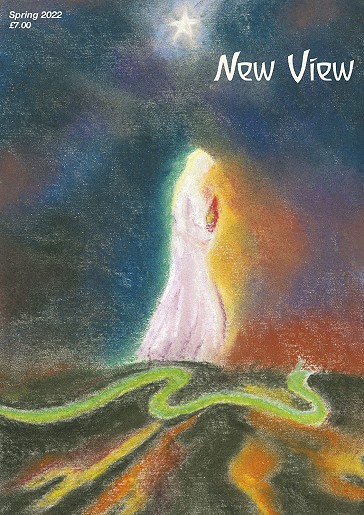 Welcome to the Spring/Easter issue of New View magazine.

Here in Britain, over the last four years, we have gone from Brexit, to climate change to covid and now the fallout from the conflict in the Ukraine. These four crises, for that is what they became, we share with the rest of the world to a greater or lesser extent. The situation in Ukraine is with us for some time to come; but so is covid and the issues around Brexit and climate that travel on. Meanwhile, much else goes on in people’s lives.

The mainstream media has pushed and accentuated each of these four happenings, often in misleading and strident, sometimes sensational, ways: there is little leaven, little peace, for the soul.

Those who work disseminating ‘news’ have in many instances abrogated a responsibility to seriously seek the truth of events and to find a balanced way to share information. Other agendas have set the news agenda – and this is also true of many sharings on the internet. As ever, one has to bring, as best as one is able, a clear discrimination to what comes towards one as ‘fact’, or truth.

Whilst the trials and sufferings of the Ukrainian people rightly bring forth compassion, it has also been sad and salutary experiencing how the media has promoted an anti-Russian perspective. Throughout the world, all countries are full of decent people; the demonising of ‘all things Russian’ that was clearly an agenda in the media creates its own fallout. One small example of this was a tour by a Russian ballet company in Britain having its bookings cancelled clearly because it was Russian and ‘in solidarity with Ukraine’ – not withstanding the fact that there were many other nationalities working and performing with the ballet company. The Arts, which can bring so much uplift to souls, suffers once more. And it should be said too that there are differing perspectives in West and East Ukraine, so what exactly passes for this ‘solidarity’?

The word ‘news’ is most likely not an acronym derived from North, East, West and South but rather comes from ‘what is new?’. At this Easter time one could think of words in the Book of Revelation: “Behold I make all things new”. All news seekers and bringers could well ponder on the meaning of this.

Richard Ramsbotham then explains the inspiration for our front cover picture in Europe in Flight. Creating our Future Now finds Ben Cherry exploring our battle for a human future. This is followed by an important issue highlighted by Richard House in On the Steiner Waldorf Schools Fellowship’s ‘Anti-racism Statement’: Making Sense of Accusations of ‘Racism’ against Rudolf Steiner.

Nic Pople, in The Prisoner Revisited, looks at themes of freedom and control that were present in a hugely popular 1960s British TV series, seeing them reflected in our current times. Bernard Jarman then opens an understanding for what underpins our fundamental rights in Sovereignty, Common Law Rights and Community.

Ricardo Bartelme, a medical doctor from the USA, offers some insight and reflections on Anthroposophic Medicine in the Time of Covid.

Introducing the first in a new series of short articles called Climate Watch, Peter Taylor also reveals some of the background to media alarmism.

Gavin Tang, writing from Australia, offers a practical possibility with an in-depth article on Imagining an alternative to the banking system of the Great Reset.

David Donaldson shares a poem What the Times Require, gently forming a connection to The Sower, an artwork by David Newbatt.

Richard House interviews Richard Masters about his new book: Rudolf Steiner’s Views and Social Reform: Threefolding and other proposals. This is followed by Zeitgeist by Michael Warden writing from Spain pointing to the threefolding ideas of Rudolf Steiner as a way forward in the context of so much that is now at work in the world.

Andy Shaw, writing from the USA, poses the question: how are we to know that something is true? He examines this in Everything We’ve Heard Is True?: The Mainstream Covid Narrative, Cognitive Hygiene and the Etiology of Fact.

In 2022 – War in Ukraine Terry Boardman gives a deep and broad historical/political insight to what has led to the present conflict. He prefaces his article with a look at the astrological indications that can ‘ray-in’, as it were, into our human concerns and how an understanding for this can help reveal forces and influences that we may recognise as underpinning events in our lives. We are, of course, always present through what works in our soul life as the agency of these happenings in relationships with one another.

Finally, a heartfelt thank you to all who have made donations to us in recent months, it is a vital lifeline now we have lost half our advertising revenue during the time of covid, which is not returning. We hope to encourage more folk to become subscribers… gift subscriptions is a good way to help this!

Difficult times. Nurture friendships and stay in touch with one another.

Wishing you well, wherever you may be,